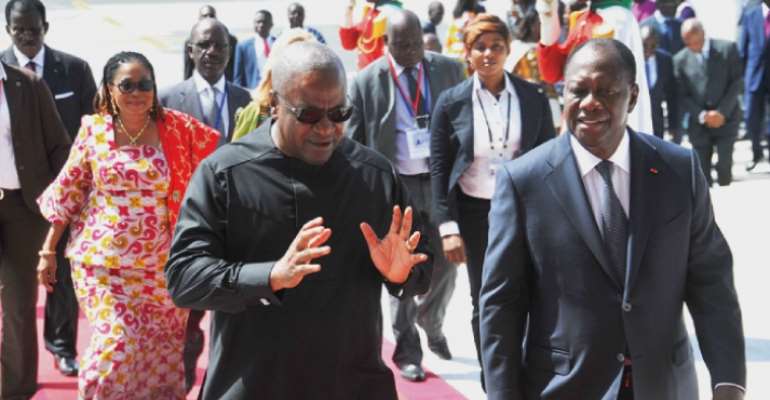 Ghana and Cote d'Ivoire have renewed their commitment to have an amicable solution to their maritime dispute. Presidents John Dramani Mahama and Alhassane Ouattara made the commitment during bilateral talks in Abidjan yesterday.

President Mahama is on a two-day official visit to CÃ´te d'Ivoire.

Speaking at a news conference after their meeting in the Presidential Palace in Abidjan, the two leaders said their discussions centred on boosting economic activities between their countries, spearheading the regional integration efforts of the sub-region and how to amicably resolve the maritime border issues.

He restated Ghana's commitment to work with Cote d'Ivoire to protect their borders.

He also restated Ghana's condemnation of the terror attacks on Grande Bassam.

"We consider any attack on Cote d'Ivoire as an attack on Ghana," he said.

Refugees
Turning to the issue of Ivorian refugees currently in Ghana, President Mahama said Cote d'Ivoire should have nothing to fear when it happened that the refugees had to return home.

He thanked Cote d'Ivoire for the support it continued to give to Ghana anytime the latter faced challenges with power supply.

Ouattara grateful
President Ouattara congratulated President Mahama on his leadership and impactful tenure as Chair of ECOWAS, noting that he (President Mahama) had demonstrated a clear commitment to the integration effort and brought his influence to bear on a number of issues in the sub-region.

He also recognised President Mahama's role in the development of a new spirit of cooperation between Ghana and Cote d'Ivoire.

According to him, President Mahama had, over the years, enhanced the level of relations from where President John Evans Atta Mills began before his death.

President Mahama has visited CÃ´te d'Ivoire on a number of occasions but this is his first official visit to our neighbour. He is accompanied by the First Lady, Mrs Lordina Mahama.

President Mahama was handed the key to the Autonomous City of Abidjan and made an honorary citizen of CÃ´te d'Ivoire.