Choosing Old Age Expertise Over Youthful Incompetence: Why Ghana Must Go The ‘Ivo-Austrian’ Way On November 7 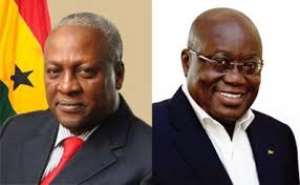 Alexander Van der Bellen- a 72 year old professor of Economics has been elected president of Austria, defeating Norbert Hofer, a 45 year old ‘good-looking’ aeronautical engineer of the freedom party of Austria in a tightly contested run-off. Though an independent candidate, not even the candidate of the ruling Social Democratic Party could stop Mr. Bellen from being elected. With his charming physical presence and a favorable age (46) to tag him youthful as well as enticing the youth, Norbert Hofer won the first round of the elections with a commanding 35% whereas his main challenger- Mr. Bellen only managed 21% of valid votes cast which forced the elections into a run-off.

The young Mr. Hofer incited Austria’s less educated, working class and youth at distant small towns with his anti-immigration campaign, which narrowed the nation’s challenges to the over 90,000 refugees seeking asylum in the country due to the current migrant crisis facing Europe. He fueled passions and bred anger among unemployed Austrians who accuse migrants, refugees and foreigners for taking over their jobs and imposing hardships.

Though Mr. Hofer identified a lot of problems facing his country, Austrians decided he wasn’t the right man to solve those problems. Instead, electorates in Austria used their brains ahead of inflamed passion in choosing an economic brain to salvage their country from its mess than leave it to Mr. Hofer- a former soldier who flew planes for the Austrian army.

To the many Austrians that voted, whatever the 72 year Mr. Bellen lacked in physical appearance, he compensated it with his superior economic brain prowess. As such, entrusting the destiny of their nation into the hands of a man with economic brains is a worthy investment compared to merely voting into office an individual with good looks.

In Cote d’ Ivoire, 74 year old Alassane Dramane Ouattara after inheriting a collapsed economy in 2011, has successfully transformed the Ivory Coast- a nation that was plagued by a gruesome civil war that destroyed properties, claimed 3000 lives and displaced over 100,000 people in 2011 into a modern African success story with his prudent management of the Ivorian economy, further modernization and intended industrialization of its agricultural sector, investment in infrastructure, wise spending and total abhorrence against corruption.

Under his leadership, the Ivory Coast has surpassed Ghana and Brazil to become the leader in cocoa production, having produced a record 1.8 million tons in the 2014-2015 season. He announced plans to make his country produce half (50%) of the world’s cocoa by 2020. The Ivory Coast has also become Africa’s largest exporter of banana and cashew nuts under his tutelage. Unlike other sub-Saharan countries where national wealth has been the sole preserve of political cronies, apparatchiks, friends and family, Mr. Ouattara has evenly distributed the national cake for all Ivorians by raising the minimum wage from 36,000 francs to 60,000 francs for low incoming earning workers.

Ironically, just when the Ivory Coast was experiencing its civil war in 2011, Ghana unlike its western neighbour had begun the commercial production of oil, currently cashing in on as many as 240,000 barrels of oil and 240,000 million standard cubic feet of gas daily, under the phase two of the Jubilee Field project. Over 3 billion dollars has been generated from oil exports since 2011. When everything seemed to be going well for Ghana, Ivorians on the other hand, had all things going against them. Banks, schools, hospitals, foreign missions and even churches closed as the war intensified. Ghana, known for its hospitality became a safe haven for many Ivorian refugees who fled the war.

Yet, in just a matter of time, the Ivory Coast under the leadership of its 74 year old president has turned its fortunes around, becoming the fastest growing economy in the sub-Sahara at a consistent rate of 8% for the past three years. Ghana, which should have been doing better has strangely disappointed economists who predicted a pathway to prosperity following the solid economic foundations that were laid by the Kuffour administration even without oil. Why a recently war torn country could suddenly develop ahead of an oil producing neighbour, is certainly a tale of two nations with one nation choosing to invest wisely in its economic development with the little it has whereas the other has profligately wasted its billions on branding buses, GYEEDA, SADA and rearing guinea fowl that flew to Burkina Faso and never returned.

Having been sworn in as vice president at age 50 and becoming president at 53 following the demise of his predecessor John Mills, president Mahama mounted a spirited, sympathetic and propagandist campaign in 2012, pleading on the Ghanaian youth to vote for him because at age 53, he and his NDC party out of their own uncommon logic considered him as youth. To rightly perfect upon his sudden assumed youthful status, the president caricatured his persona to suit the outlook of a youth by donning a red lacoste polo shirt for his campaign posters, banners and billboards that decorated the streets of Ghanaian cities, towns and villages.

Perhaps, the only Achilles’ heel to have exposed and made mockery of president Mahama’s self- imposed youthfulness were the grey hairs that scattered his natural black. Possibly, handlers of the president were not smart enough to consult their counterparts in Zimbabwe. Had they, they would have been tipped that the good old Robert Mugabe has successfully cheated nature and deceived the public for years with Chinese and Russian made black-hair dyes.

Considering his long standing feud with America and other western powers he blames for everything including his own hair turning grey, the last standing Pan-Africanist wouldn’t opt for capitalist western products, not even for his dogs! Apologetically, president Mahama argued that, since Ghana’s return to multi-party democracy, every elected government has been offered two terms to prove to the masses what they can do. Hence, denying the NDC another four years would be unfair on the part of electorates. Today, the same man is pleading for four more years with very strange reasons. The bigger question is, what can the president achieve in the next four years that he couldn’t have achieved in the last eight he served as vice and later president of the republic?

Alhassane Ouattara of the Ivory Coast, Angela Merkel of Germany and Buhari of Nigeria have all proven, that being old does not prevent one from being a good leader, not fit for office or incompetent. Whatever the young Goodluck Jonathan couldn’t do for years, Buhari swiftly implemented them just months after assuming office as president of Nigeria. In Ghana, we all aspire to grow old but have been brainwashed that being old makes one less competent or not fit to run any public office. One gentleman to have suffered the ‘he is too old’ syndrome is former Black Stars goalkeeper, Richard ‘Olele’ Kingson.

At our maiden participation at the FIFA world cup, Richard Kingson demonstrated great experience as his numerous timely saves took Ghana beyond the group stages to the next stage of the competition in Germany. In 2010, Ghana again, became the only African side to have passed the group stages and even defeated almighty America to reach the quarter finals for the first time in the nation’s football history. It took a stubborn Louis Suarez to deny us a record semi-final appearance in South Africa. Though Asamoah Gyan got most of our goals at the tournament, our progress wouldn’t have been possible without the incredible saves of Richard Kingson that denied our opponents some crucial goals. Whether by fate or witchcraft, the entire nation after the tournament descended on him, labelling him an old man unfit for the stars.

Just as Mugabe has been trending on our various social media platforms with purported silly, synical and funny quotes attributed to his name, Olele had his fair share of Ghana’s social media mob action that prematurely separated Nana Aba Anamoah from her favourite TV3 and convicted KKD as a serial rapist when the latter had not even been charged yet. Suddenly, edited pictures of Olele and Dr, Kwame Nkrumah were seen trending, Olele and Yaa Asantewaa, Komfo Anokye and even images of Olele and Jesus Christ were made just to depict him as too old for the Black Stars of Ghana.

Eventually, he was dropped from the Black Stars as we went for the 2014 World Cup in Brazil. In his absence, we conceded as many as 7 goals in the group stages and failed to progress beyond the group stages for the first time. Adam Kwarasey and Fatau Dauda, the so called ‘young goalkeepers’ we selected to replace Olele failed woefully. In the end, it was obvious, that the good old Richard Olele Kingson was far better than the so called young, energetic and active replacements we took to Brazil. Again, it was proven that age, has got nothing to do with competence.

One individual who has suffered tremendously from the he is too old syndrome in Ghana’s politicking is Nana Addo Danquah Akufo Addo, the flagbearer of the New Patriotic Party. For a celebrated legal luminary, statesman, entrepreneur, freedom fighter, activist and distinguished politician like Akufo Addo to be denied the highest office of the land not because of corruption, extra marital affairs, treason or embezzlement but on the sole basis of old age is morally appalling, intellectually shameful and logically illogical.

Sadly, proponents and campaigners of this strange illogical logic are not those who cannot read and write. No, they are the crème de la crème of educated elites, taught to reason but restricted by partisan interests to do so. Just as prostitutes care less about who sees their nakedness and goes into them in as much as money is on the table, these sect of educated comrades belittle their own intelligence, defends the indefensible and makes mockery of intellectuality all in the name of partisan interest.

Just as Nigerians gave Buhari the chance, Ivorians- Ouattara and Austrians- Van der Bellen, so must Ghanaians say no to nation wreckers, tribal politicians and incompetent leaders to rescue our dear nation by voting into office, Nana Addo Danquah Akufo Addo as the next president of Ghana. Nana Addo might not meet our six-feet-tall criteria of elected public office holders, but the destiny and interest of Ghana must compel us to sacrifice our personal expectations in fulfilment of higher and important national interests. Tetteh Quarshie brought cocoa to Ghana and as a result has been a blessing to Ghanaians.

Unlike Tetteh Quarshie, history will never remember us as those that brought cocoa to Ghana. However, we can vote for change by bringing onboard Akufo Addo to rescue the nation’s struggling cocoa sector and make Ghana the number one producer of cocoa in the world again. Unlike members of the notorious ‘big-six,’ history will never remember us as the pioneers behind Ghana’s independence, however, we can vote Akufo Addo into office to restore the real independence of Ghana since a nation forced into accommodating dangerous Al-Qaeda terrorists on its soil at the risk of its own safety and that of its citizens cannot be truly regarded as independent. The destiny of our great nation is in the hand of all Ghanaians eligible to vote. We have an enviable opportunity due to the power of democracy, to write our names in gold in Ghana’s history book as the nation that chose competence over age, good-looks and petty tribalism.

May God bless our homeland Ghana and make our electorates wise and strong.