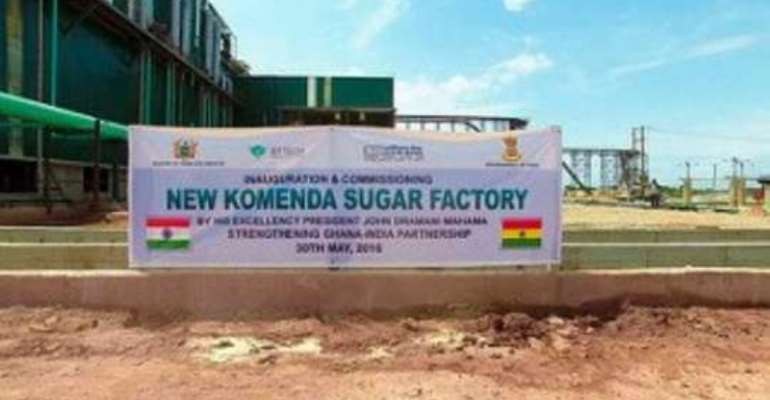 By Justina Paaga, GNA
Komenda (C/R) May 31, GNA - President John Dramani Mahama has announced that the Ministry of and Trade and Industry would institute a national sugar policy to enhance the production and export of sugar.

The President announced this when he inaugurated the revamped Komenda Sugar Factory on Monday at Komenda in the Komenda- Edina Eguafo -Abrem of the Central Region.

The factory which was re-constructed through an Indian Exim Bank loan has the capacity to crush 1,250 tonnes of sugar per day as compared to the 1,000 tonnes the collapsed Komenda sugar factory used to produce.

The President said the revival of the factory forms part of the 'Better Ghana Agenda' and government's vision of industrialising the country by transforming the structure of the economy and creating jobs .

He said the establishment of the factory would add value to the lives of the people of Komenda and create jobs for more than 7,300 people.

President Mahama said the collapse of the old sugar factory resulted in the country's high dependence on sugar importation.

He said government spends close to 200 million dollars in the importation of sugar annually and the new factory would change the situation.

He said the factory would also produce by-products such as energy, which would be used by the firm as well as molasses for the alcohol industry.

The President said to sustain the raw material base of the factory, government has secured 24 million dollars Indian Exim Bank loan to be used to support sugarcane out-growers.

He said the factory is ready to purchase all sugar-cane produced in the catchment area and beyond.

President Mahama said currently GH¢ 60.00 is being paid for a tonne of sugarcane sold to the factory.

He appealed to the chiefs and landowners to make land available to young people who are interested in the sugar cane business.

He also advised them to keep a watchful eye on the factory so that it does not collapse again.

He said access roads to the sugar factory would be awarded on contract to facilitate the smooth movement between communities in the catchment area.

The Minister of Trade and Industry Dr Ekwow Spio- Garbah also called on the chiefs to make land available for those interested in the sugar cane business noting that there is ready market for them.

He pledged that everything would be done to sustain the factory while Ghanaians would be encouraged to buy shares in the company.

He appealed to both local and international investors to invest in the industry.

Dr Spio-Garbah said many Ghanaians would be employed at the factory and would be trained by the current Indian mangers.

Mr Rickett Kweku-Hagan Regional Minister asked the management of the factory to develop the culture of maintenance to sustain it.

Nana Kojo Kru Paramount Chief of Komenda commended the late President John Evans Atta Mills and the current government for the efforts of reviving the factory.

'Before this Komenda was dead but with the new factory Komenda is back to life,' he said.