Migrant crossings to Italy -- what do we know? 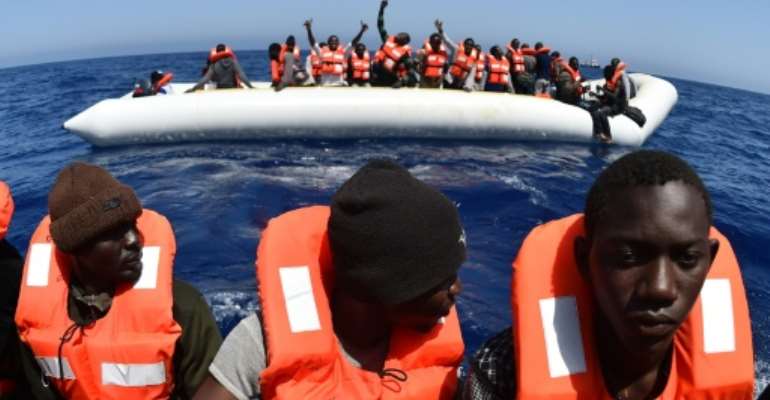 Migrants and refugees bound for Italy are rescued from the Mediterranean by humanitarian organisations off the Libyan coast. By Gabriel Bouys (AFP/File)

Rome (AFP) - With 13,000 people rescued in one week and hundreds presumed drowned, what do we know about migrant flows across the Mediterranean to Italy?

Is there a surge in the number of boat migrants compared to 2015?

No, the numbers are stable. There have been over 46,700 arrivals so far in 2016 according to the UN's refugee agency, compared to 47,463 in the same period last year. While the Italian navy, coast guard and EU rescue vessels intercepted an average of 15 migrant boats a day last week, there were almost 2,500 fewer arrivals in May 2016 than 12 months earlier.

Are Syrian refugees switching from the Balkans route?

Despite predictions the closure of the route from Turkey to Greece would push Syrian refugees to attempt to reach Europe via departure points in Libya and Egypt for Italy, there has been no evidence of this so far. Almost all of the migrants come from Sub-Saharan Africa.

How many people have died this year during the crossing?

Over 1,700 migrants are feared to have drowned during attempts to reach Italy, including 550 on a boat which sank on Thursday according to survivor testimony gathered by the UNHCR and Save the Children. The International Organization for Migration (IOM) missing migrant project says at least 1,782 people died in the same period last year.

How many people are ready to set off from Libya?

A joint report published by Europol and Interpol this month said there were around 800,000 migrants in Libya waiting to attempt the journey across the Mediterranean. While some migrants arrive in Libya and are able to pay their way onto a boat within weeks, others who have worked in the country for years eventually decide to leave or manage to bribe their way out of detention centres. The chaos in the Libya since the fall in 2011 of late dictator Moamer Kadhafi has been exploited by people traffickers, many of whom hold migrants hostage until they can get relatives back home to send more money for the onward journey to Europe.

Are migrants forced to board the rickety vessels?

There have been numerous reports from survivors of people being forced to board boats and dinghies on Libyan beaches at gunpoint, as well as reports of people being shot dead if they refuse or try to escape. According to Italian police, some of those who escape Libyan kidnappers and survive the crossing are then held hostage by other migrants in Sicily in a bid to extort more money from them.

Is the number of pregnant migrants or newborns on the rise?

Doctors Without Borders warned this week that assaults on migrants in Libya appeared to be on the rise, including the rape and forced prostitution of women -- and teenagers -- who attempt the journey to Italy either pregnant or with newborn babies. There does not appear to be any global data on the numbers.

Where are they leaving from and what is their aim?

Roughly 90 percent of boat migrants arriving in Italy set off from Libya and 10 percent from Egypt, according to the UNHCR. Smugglers setting off from Libya, or migrants appointed temporary "captains" by the traffickers, sound the alarm the moment their boats get into international waters. They use satellite telephones to call for help in an area heavily patrolled by Italian and EU rescue vessels. Those setting off from Egypt hope to reach the area covered by Italian rather than Greek coastguard.

Smugglers organising departures from Egypt have in the past preferred fishing boats for the longer journey to Italy, while those in Libya have plumped for dinghies, which were easily ordered online and assembled at the last minute. But the IOM has noted a rise in the number of fishing boats being used from Libya. Italian media say the boats are bought from Tunisia and sold to people smugglers at cut-rate prices due to a market surplus.