Peace Is Non-Negotiable For Elections -Minister 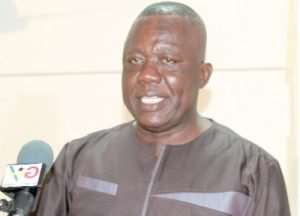 MR. JOHN Alexander Ackon, Ashanti Regional Minister has assured that the Ashanti Regional Coordinating Council (RCC), in collaboration with the Regional Security Council (REGSEC) would work to ensure that the region remains peaceful before, during and after this year's elections.

He said his administration would go for peace and that is non-negotiable because it is in the collective interest of the people to ensure the prevalence of peace at all times. Addressing the media at the maiden meeting with media practitioners at a press soiree in Kumasi the Minister assured that strong security actions and measures would be taken to ensure peace on the Election Day.

According to him, government is committed to ensuring that there is peace and pleaded with the development partners and organizations that are committed to peace to compliment the efforts of government to ensure peace. Minister Ackon also pleaded with the political parties to commit themselves to the promotion of peaceful and violence free elections this year.

According to him, there was the need for the Interior Ministry, Ministries of Lands and Natural Resources, Works, Housing and Water, Food and Agriculture and Finance and Economic Planning Ministries as well as development partners to dialogue and find solutions to the unhealthy development in the area. He said stakeholders would have to consider land with accessible water for the Cattle.

The Minister also called on people to fight against the menace of illegal mining {galamsey}. He stressed the need for the general public to monitor water bodies against pollution by galamsey activities and ensure the right thing is done at all times. He bemoaned the situation where activities of alluvial gold miners in the Konongo area has affected the US$58 million water project at Konongo, following the  cessation of water flow to the reservoirs.

Mr. Ackon expressed his profound gratitude to Otumfuo Osei Tutu, the Asantehene, for coming to the aid of RCC and REGSEC to solve the crisis which emanated from Tafo rioting, resulting in the pacification of Chief of Tafo. The government, he announced, has fully paid the various Metropolitan, Municipal and District Assemblies {MMDAs} their share of District Assembly Common Fund (DACF) for 2015.

Mr. Ackon also said the DACF for the first quarter of 2016 has also been fully paid and that the government does not owe in that respect. The Minister noted that the government would continue with social interventions and hinted that GHc29 million had been released for NHIS registration and capitation stressing that the NHIS is living and not dead.

The Deputy Regional Minister, Mr. Andy OseiOkrah, on his part, assured the media of their close relationship to enable the media and RCC to work hand in hand to ensure the total development of the region. He disclosed that, the media are not meant for negative reporting, saying if you give them positive story they would sent it out there, and assured the media that their doors are always open to them about the development of the region.