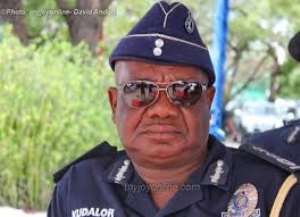 What? So President Mahama’s IGP John Kudalor is mulling the idea of “blocking all social media outlets as a means to ease tension as well as limit others [?] who operate behind the networks to cause fear and panic” during the upcoming November general election day? First of all, what “tension”? Any smart-thinking Ghanaian wouldn’t be surprised that the head of Ghana police service is contemplating on using the social media as a cannon fodder or as a ploy to carry out his boss—President Mahama—wishes on the elections day come November.

Just read between the lines and connect all the dots together, including the negative pronouncements and the indictments Mr. Mahama has been making regarding the social media trends in Ghana, to figure out where the IGP is coming from.

President Mahama seems to have abhorrence for the media in general unless they’re singing his praises. He doesn’t want to accept that no one forces him to become the president of a democratic nation where free press forms the most important part. If he can’t take the heat of criticisms that always come with democracy, why can’t he bow out at the end of his term rather than using all means—via the security agencies—to get reelected come November 2016? Based on his utterances, Mr. Mahama seems to regard the media, especially the social media, as his administration’s nemeses of the highest order.

Any wonder every opportunity Mr. Mahama gets, he takes direct or veiled swipe at the media and how some Ghanaians are using the social media to discredit his government’s accomplishments. It is also instructive to note that President Mahama is nimble at hiding behind or using the national security agencies to do his dirty jobs for him, all in the name of the so-called “interest of the nation’s security.” Like in the case of BNI, critical-thinking Ghanaians know the IGP’s position is not independently professional; its major functions are micromanaged from the Flagstaff House, period!

Other than that how can a “mere IGP” make a bold constitutional policy proposal of this magnitude in public, and double down on it without the “unseen hands” of the president underneath? If Mr. Mahama isn’t on board or has no foreknowledge of Mr. John Kudalor’s delusional suggestion vis-à-vis blocking the social media on the general election day, the IGP would probably have been demoted or unemployed by now. But, this is not going to happen since the head of the Ghana police force is executing the wishes of his overlord—President John Mahama.

The president loves to put up smiling faces anytime he meets people, including all photo op events, for ordinary Ghanaians to think he is down-to-earth or gets along with everyone. But as the good old Shakespeare would say: “Gilded tomb do worms enfold.” Simply put, don’t let that smiley persona fools you in that not all that glitters is gold. Mr. Mahama is the trickiest, divisive, and cunning president Ghana has ever got. He knows how to use decoys and also manipulates his surrogates well. Whenever the president is not using the IGP/police or the BNI, he depends on the big-mouthed but empty-headed Koku Anyidoho and Asiedu Nketia to do the “dirty job” while Mr. Mahama himself gets busy trying to look presidential and fools Ghanaians as if he genuinely believes in uniting all Ghanaians.

In any event, whatever the motivating factor(s) is, any attempt to shut down the social media under the pretext of ensuring the so-called peace or the “means to ease tension as well as limit others” before or during the impending general elections will be the dumbest political suicide ever committed in the post-dictatorial Ghana. More significantly, there are no constitutional underpinnings that give any power to the IGP or any of the country’s security institutions under the current political system to “block” any form of the media outlets for even one-tenth of a second. The IGP’s suggestion is dangerous, unconstitutional; suffice to say, a sheer exhibition of political hubris and short-sightedness. The idea risks inciting political instability in Ghana if indeed the Mahama-led government uses or outsources to the IGP the “dirty job” of stifling the free flow of digital media during the general elections in November.

In every civilized democratic society, its professional police force’s primary function is to enforce law and order as opposed to acting as legislative body or trying to usurp the constitutional powers of the three branches of government. “Blocking the social media” under a rare circumstance may fall under the Emergency Powers clause (31) of the Ghana Constitution; and, the power to declare the state of emergency is given to the president in consultation with the Council of State. Even in that scenario, the president has to immediately let the parliament knows the reason(s) behind the declaration of such state of emergency and whether parliament approves or disapproves the measure. That is not the IGP’s business.

Here is the IGP Mr. Kudalor again: “At one stage I said that if it becomes critical on the eve and also on the Election Day, we shall block all social media as other countries have done. We’re thinking about it.” Who are the “we” here? When the IGP ignorantly claims that he may block the social media feed because some countries have done similar thing before, which countries is he referring to? Is he talking about credible democracies such as Britain, Canada, United States, Australia, and India, or one-man rule societies like Uganda, Zimbabwe, China, Iran, and Cuba? Comparing democratic Ghana to nations like Uganda or Zimbabwe, for instance, is a shame and a mark of ignorance.

History has shown that in many African countries political violence unfolded not before or during, but usually in the aftermath when the election results are tallied and people strongly believe the process is not free and fair. It appears President Mahama-backed IGP already knows there may be an outbreak of violence on the eve or during the general elections and that he is certain the social media will be the cause of that chaos hence his outrageous suggestion. One wonders on what scientific study or polling analysis does the IGP uses to single out the social media as the potential cause of election disturbances?

It is so embarrassing that just when you think some of these Ghanaians leaders are beginning to embrace moral and contemporary act of leadership, they once again fall back into their primitive, old ways. The GJA and the Media Commission must wisely but forcefully educate President Mahama, Mr. Kudalor, and any self-serving public official thinking of “blocking” social media before or during the upcoming general elections to understand that because of the “media convergence” the difference between the so-called traditional media and social media is almost non-existent.

Literally, if you block the social media you have also blocked more than half of the total output of a particular newspaper outlet. Almost all print media across the globe today have their presence online, including on the social media. More so the 4th Republican Constitution clearly guarantees the free press. Any suggestion of disrupting any part of the media is a blatant violation of the country’s constitutional arrangement. Potentially, such a move will definitely have unintended consequences. The blockage will be a recipe for social unrest in Ghana!

The writer is based in the U.S. He currently teaches university/college level political science. He also teaches media influences on American culture and critical thinking. Email: [email protected]