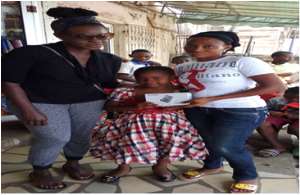 The Pamela Bridgewater Project has organized a talent show for children in the Nima-Mamobi suburb of Accra to unearth the talents of brilliant children in that community.

The programme, which was in partnership with the Predelus family from the United States of America, was aimed at encouraging the kids to be familiar with their talents and make it useful to themselves and to the nation.

The children participated in competitions such as poetry recital, singing, musical chairs and dress-making.

The overall winner, Prince Ayimadu, 14, of Kotokobaabi Parent’s Pride was the proud recipient of a laptop, Nihad Mohammed Awal, 11, of Stars Valley Academy, who came second, took home an ipad. Shakira Abdallah, 7, of Rachel School Complex who came, third third got a camera and Jonny Monney, 13, of United Faith School received an ear piece device for his fourth position.

Eight year old Tahira Ibrahim of Malam Mustafa School at Kawokudi emerged the overall winner of “Sow and wear your dull” competition. All 10 girls who participated in this category were presented with adorable dulls whiles Tahira was taken on a shopping spree at the Accra Mall.

Each of the participants received children’s cosmetics from the organizers.

A foster mother of the Pamela Bridgewater Project, Auntie Margaret Abossey, schooled the children on the dangers of teenage pregnancy and how to prevent all forms of abuse with depicting artworks and pictures.

The head of the Predelus family, Ms Justina Predelus, who volunteered for both the Kejetia Kayayei Resettlement Center and Nima-Mamobi Girls’ Vocational Center described the kids as very talented and advised them to cultivate the habit of reading story books.

The family donated sewing materials to the Vocational Center to equip girls with the needed skills to make then economically viable to themselves and the nation.