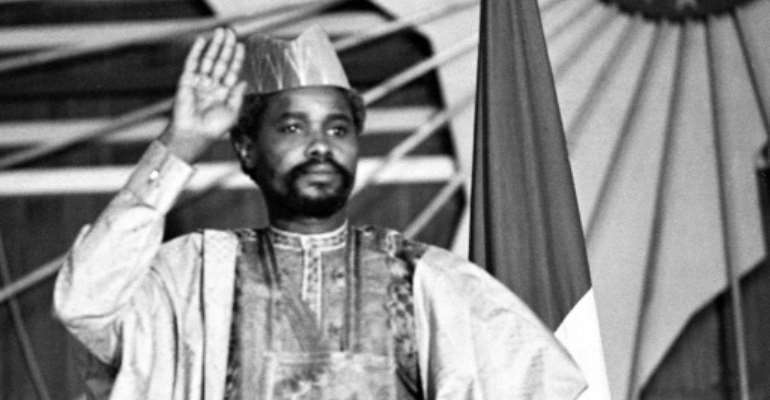 Chad's ex-president Hissene Habre in 1983 subjected his country to an eight-year reign of terror. By JOEL ROBINE (AFP)

Dakar (AFP) - A desert warfare specialist, Chad's Hissene Habre seized power in 1982 and quickly embraced the role of ruthless dictator, with brutal atrocities the hallmark of his eight-year reign of terror.

Often dressed in combat fatigues that complemented his "desert fighter" nickname, Habre fled to Senegal after he was ousted by current Chadian President Idriss Deby in 1990.

Habre will now serve the rest of his life behind bars after judges in Dakar Thursday upheld his sentence for war crimes, crimes against humanity and torture, quashing the appeal attempt by his court-appointed lawyers, though a rape conviction was overturned.

Habre was first sentenced by the Extraordinary African Chambers in May last year, setting a global precedent for the first time a country had prosecuted a former leader of another nation for rights abuses.

The legal body created by Senegal and the African Union further ordered him in July to pay compensation to each victim who suffered rape, arbitrary detention and imprisonment during his rule, as well as to their relatives, a decision also upheld on Thursday.

Reed Brody, a US-based lawyer who has worked closely with Habre's victims to secure the conviction, said the final verdict would "go down in history as the day that a band of unrelenting survivors finally prevailed over their dictator," all of whom have waited a quarter century for justice.

The 74-year-old's rule was marked by fierce crackdowns on dissent, including alleged torture and executions of opponents, earning him comparisons to Chilean dictator Augusto Pinochet.

Investigators found that more than 40,000 people were killed during his rule.

The son of a farmer, Habre was born in Faya-Largeau, northern Chad, and grew up among nomads in the Djourab desert.

His intelligence landed him a job as a local official before he left for Paris in 1963 to study law and attend Sciences-Po, the prestigious political science school. One of his influences at the time was Ernesto "Che" Guevara.

Habre joined the Chad National Liberation Front a year after returning home in 1971 and became its leader, before breaking away to form another rebel group, the Northern Armed Forces (FAN).

He made headlines in 1974 when he kidnapped a French ethnologist who was held for three years before France agreed to terms for her release.

A staunch nationalist, Habre then served as prime minister in the government of president Felix Malloum and as defence minister under his sometime ally Goukouni Weddeye who later became president.

Unlike Weddeye, Habre was an outspoken opponent of Libyan leader Moamer Kadhafi and the relationship did not last.

Habre broke from his Tripoli-backed ally just months after the formation of Weddeye's 1979 government, triggering violence in Chad's capital, N'Djamena.

During his rule, opponents -- real or imagined -- were arrested, tortured and often executed by the dreaded Documentation and Security Directorate (DDS), Chad's secret police.

Habre's reign ended as dramatically as it had begun when Deby, formerly a loyal general, led a rebel force that drove him from power and into exile in Senegal.

The former dictator lived freely for more than 20 years in an upmarket Dakar suburb with his wife and children, swapping his military garb for billowing white robes and a cap.

Habre was considered a discreet, generous neighbour and a pious Muslim who helped finance the construction of several mosques.

The AU mandated Senegal to try Habre in July 2006, but then president Abdoulaye Wade delayed the process for years despite an agreement to create a special court for the trial.

Belgium also sought Habre's arrest over allegations of war crimes and crimes against humanity after three Belgian nationals of Chadian origin filed a suit in 2000 for mass murder, arbitrary arrest and torture during his regime.

Brussels issued an arrest warrant for him in September 2005, and he was arrested in Senegal shortly after, but the African country said its courts did not have the jurisdiction to rule on a Belgian extradition request.

Habre was arrested again in Dakar on June 30, 2013, and the AU decided his trial should take place there, a world first.

Now a convicted war criminal Habre will serve his sentence in Senegal or another African Union country.