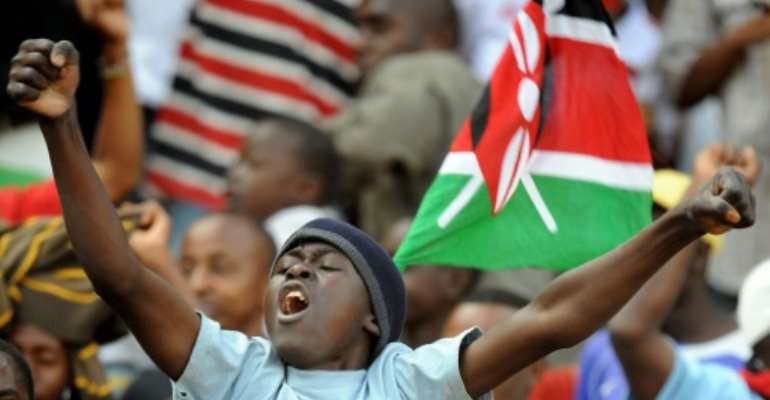 Kenya earn a 1-1 home draw with Tanzania in a warm-up match ahead of 2017 Africa Cup of Nations qualifiers. By Simon Maina (AFP/File)

Johannesburg (AFP) - Southampton midfielder Victor Wanyama converted a penalty to earn Kenya a 1-1 home draw with Tanzania on Sunday in a warm-up match ahead of 2017 Africa Cup of Nations qualifiers.

A crude tackle just inside the box led to the spot-kick and although the Tanzanian goalkeeper correctly guessed the direction of the penalty, it was too hard and high for him to stop.

Although outnumbered after lackadaisical defending allowed the ball to be crossed, Maguli reacted quickest to nod past goalkeeper Boniface Oluoch.

Recently appointed Kenya coach Stanley Okumbi gets another chance on Tuesday to record his first win when the Harambee Stars host Sudan in another warm-up.

Tanzania are at home to Egypt next weekend needing either a 3-0 victory or a four-goal winning margin to retain a chance of qualifying for the Cup of Nations in Gabon.

Kenya, bottom of another group with just one point from four qualifiers, remain in Nairobi to play Congo Brazzaville.

There are two friendlies on Monday involving African national teams with Egypt meeting the Democratic Republic of Congo in Borg El Arab and Cameroon facing Euro 2016 hosts France in Nantes.