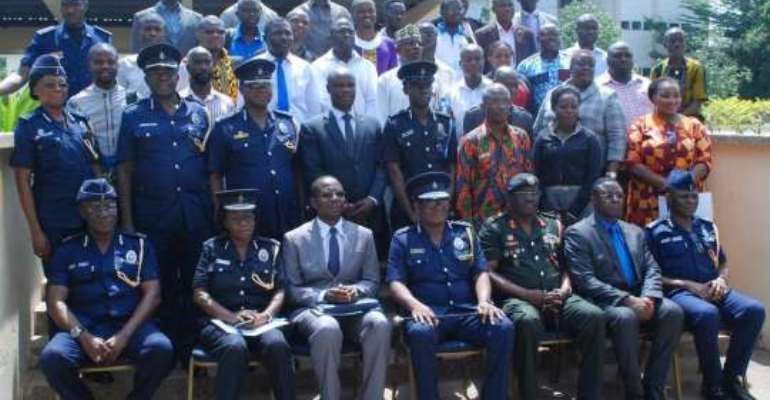 By Francis Ameyibor, GNA
Accra, May 27, GNA - Mr John Kudalor, the Inspector General of Police has stated the need for all democratic stakeholders to work together to ensure electoral integrity.

'Peaceful, credible elections are the responsibility of all, and not only of the Electoral Commission (EC). Candidates, political parties, civil society organisations (CSOs), religious and traditional leaders among other all have a crucial role to play.

'Indeed the success of the election is going to be achieved through the concerted effort of all, including the media, political parties, CSO, and all other stakeholders,' Mr Kudalor said in Accra during an encounter with the senior media practitioners.

The Police/Media meeting dubbed: 'IGP's Dialogue Series,' is a general platform created under the leadership of Mr Kudalor to engage with all identifiable bodies to share ideas and drum home to stakeholders their roles for free, fair and transparent elections.

Speaking at the first in a series of Police/Media encounter which was on the theme: 'Safeguarding our democracy: Role of the Media in Peaceful Elections,' Mr Kudalor said the media wield strong influence over the people because of its peculiar position as informers, educators, and entertainers of the people.

'This places a very enormous responsibility on your shoulders before, during and after the November 7 General Election.

The role of the mass media is perhaps the most crucial of all, especially in this era when any piece of information, whether positive or detrimental can be disseminated to all corners of the world at a snap of the fingers.

'It is against this back-drop that you will be required to put the interest of the nation first in your reportage on the election. Your expertise and professionalism will be called into action, to avoid churning out any media product that could cause public disorder,' he said.

Mr Kudalor asked the media saying: 'Your gate-keeping function will be in utmost demand and test to filter and sift all media materials to ensure that, what is fed to the public is not which inflames passion and will cause a breach of the peace.

'I don't believe any media house will want to say or do anything that will spark a conflagration in this country'.

'You must endeavour to check every information before putting it out'.

Mr Kudalor urged the media to avoid the practice where media houses assume the role of political party spokespersons and phone-in callers, and churn out all kinds of inflammatory statements.

On security operations towards Elections 2016, the IGP said the police and other security agencies have mapped-up strategic operational road map to ensure peaceful elections.

He said a detailed auditing of the entire country has been done to identify all flash-points and vulnerable areas, and comprehensive operational strategies mapped out to take care of them.

He said personnel for the election duties from all the security agencies have been earmarked, and a series of orientation and training schedule lined up to bring them up to speed with modern models of election security.

This is to ensure that the personnel approach their duties with the required levels of professionalism.'

Commissioner of Police Christian Tetteh Yohuno observed that the Police Administration considers the media as veritable partners in the quest to deliver another successful election as the police pools all the crucial strings towards a peaceful, transparent and fair elections.

'The media and the police are two sides of the same coin, with a common interest of creating a congenial atmosphere for the attainment of the socio-economic development of the country,' he said.

The media practitioners called on the Police to maintained its neutrality, provide level playing field to all political parties, put in measures to protect media houses from any possible attacks and deal with media houses who inflame passion.