Amaliba Is A Disgrace To Ghanaian Legal Practitioners 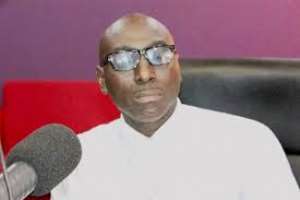 He has gone from shamelessly championing the unholy cause of resettling Islamist terrorists in Ghana to cavalierly presuming to impugn the professional integrity of unarguably one of the three or four best qualified occupants of the Supreme Court.

I am here, of course, referring to Mr. Abraham Amaliba, the so-called National Democratic Congress’ legal maven and communications team member who was afforded perhaps the most punishing butt-kicking of his political career by the forward-looking voters of Bawku during the last NDC parliamentary primary, if memory serves yours truly accurately. Back then, he accused the voters who gave him his well-deserved butt-kicking of tribalism. I thought the inhabitants of all three northern regions were culturally and ethnically homogeneous, to hear President Mahama bullhorn it on the hustings.

Well, now the congenital reprobate whom the out-going Chief Resident of the Flagstaff House cynically planted on the board of the Ghana National Petroleum Corporation (GNPC) is back in the news headlines. But this time, rather than explain to the taxpaying Ghanaian public how the coffers of the GNPC got totally emptied and effectively bankrupted, he has brazenly resorted to the harassment of the morally righteous and lambent-witted likes of Justice Jones Dotse in a scurrilous attempt to nullify the recent Supreme Court order enjoining the Electoral Commission (EC) to promptly expunge the names of voters who illegally registered to vote by the use of their National Health Insurance Cards.

There is, of course, a glaring wicked irony here regarding vigorous attempts made by NDC apparatchiks like Mr. Amaliba to prevent the civilized and progressive implementation of the National Health Insurance Scheme (NHIS) by the key operatives of the Kufuor-led New Patriotic Party. Today, wonders of wonders, it is these same parasitic freeloading NDC scam-artists who are the prime beneficiaries of the NHIS.

Needless to say, any dastardly attempt by the Mahama-sponsored commissioners of the EC to obstruct justice and the will of the Ghanaian electorate will be fiercely met with the necessary response, including armed struggle. President Mahama also needs to be made starkly and soberly aware of the fact that the same powers that enabled him to so whimsically and cavalierly transfer Mrs. Charlotte Kesson-Smith Osei from the chairpersonship of the National Commission for Civic Education (NCCE), in spite of the statutory tenure granted her at the latter commission by the Constitution, can equally be used to either return her to the NCCE or, better yet, summarily remove her from her present post for criminally breaching the law, as ably interpreted and ordered by the highest court of the land.

Indeed, it is insufferably preposterous for Mr. Amaliba and his sponsors and paymasters to rudely presume to lecture Justice Dotse about his right, or the lack thereof, to publicly expatiate on a binding Apex Court ruling which the “Kaakaamotobi” commissioners of the EC (my profound apologies to Dr. Mahamudu Bawumia) are luridly attempting to abjectly nose-thumb. Well, as might already be obvious to them by now, the seven, or so, EC commissioners have two clear-cut options presently before them, namely, the inalienable right to follow through with the Supreme Court’s order to promptly expunge the names of all registrants enrolled on our National Voters’ Register (NVR) by the use the NHIS cards, and have those who qualify among the latter reregister, or immediately resign their statutorily sanctioned commissions by default.

There is, of course, a third option which entails the possibility of these apparently recalcitrant EC commissioners electing to serve prison terms for their gross exhibition of judicial contempt for both the institutional integrity of the Supreme Court of Ghana, as well as the latter institution’s constitutionally mandated authority.

These NDC-sponsored “independent” scam-artists ought to be sternly apprised of the fact that those benighted days when they rudely and boorishly dictated policy as “revolutionary” cadres and functionaries of the Rawlings-chaperoned Provisional National Defense Council (PNDC) are well behind the times. Mr. Amaliba, wake up and smell the proverbial coffee. It is well past noon on this irreversibly forward-looking day.