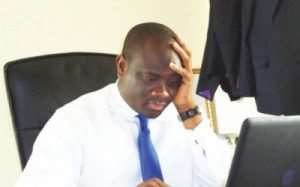 By Pascal KafuAbotsi
Mr. Stan Dogbe’s attack on a reporter with state-owned Ghana Broadcasting Corporation (GBC), Yahayah Kwamoah, who he accused of eavesdropping on his conversation with the Minister of Communications, Dr. Edward Omane Boamah at the 37 Military Hospital in Accra, has been ticked as a contributory factor to the injury on Ghana’s press freedom.

This was contained in a report by United States-based Freedom House in its latest global world press ranking, which highlighted Ghana's drop in respect of the liberty and unrestrained circumstances under which media practitioners carried out their duties.

The assault of the journalist happened when President Mahama’s ‘darling boy’ and Dr. Omane Boamah went to the hospital to visit members of the presidential press corps, who were involved in a gory accident that led to the death of Ghanaian Times correspondent, Samuel Nuamah.

The duo were said to be strategising on how to convey the death of the journalist to his family when Mr. Kwamoah popped up. Even though he was under public pressure to apologise and replace the voice recorder, Stan Dogbe remained arrogant and defiant.

It, however, took the benevolence of the Media Foundation for West Africa (MFWA) to have the recorder replaced for the journalist. Following the replacement of the gadget, the MFWA petitioned President John Mahama, after it had solicited the signatures of over 100 journalists, to take action against Stan Dogbe.

After about three months, an unsatisfying response to the petition that only sought to dance around the matter, came from the Office of the President.  In the letter, which was addressed to the MFWA and copied to the National Media Commission (NMC), the Secretary to the President, Mr. Kwesi Quartey, communicated President Mahama's receipt of the petition and acknowledgement of the concerns raised by the petitioners.

It stated: “I acknowledge receipt of your letter dated 14th October, 2015, addressed to His Excellency the President on the above subject. His Excellency has taken note of the concerns raised in the letter.

“He wishes me to assure the Media Foundation that due attention would be paid to the matter in the interest of protecting the reputation of the Presidency.”

Apart from­ Stan Dogbe’s assault on the journalist, the murder of radio broadcaster George Abanga and the absence of the Right to Information Law were also captured by Freedom House, as circumstances that had led to Ghana's drop in the latest global world press freedom ranking.

In a statement, the Media Foundation for West Africa (MFWA) noted that for ten years now, Ghana had remained one of two or three countries on the African continent rated as having a free press freedom environment. This ranking has always reflected extremely positively on Ghana's reputation in the global community as far as press freedom is concerned.

But in its recently released ranking for 2015, Ghana has been downgraded from “Free” to “Partly Free”.  In a report that extensively cites MFWA's work, Freedom House noted that Ghana's decline in ranking was as a result of “stepped-up attempts to limit coverage of news events and confiscation of equipment; increases in violence directed at journalists by the police, the military, political party members, and ordinary citizens.”

Other reasons for the decline, according to the report, were violations against journalists that went unpunished by the state; inaction by the President on a petition by 155 journalists on the attack by his staffer on a journalist; and attacks on journalists by political party activists and security forces.