US Dishes Out $11,000 To Support Production Of Palm Oil 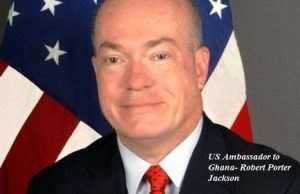 An eleven thousand US Dollar-Oil Palm Extraction project, sponsored by the US Government, has been inaugurated at Asekesu, a farming community, and its neighbours, in the New Juaben Municipality.

The project, which is under the US Ambassador Self Help Project, is expected to create employment and sustainable development for six communities in the area. It is to be managed by the Peace and Love Association, an all women group engaged in the production of palm oil.

Speaking at the ceremony, Mr. Jimmy Mauldin, the Economic Counselor of the US Embassy, said since the Self Help Project was introduced in 1990, the US Embassy had supported various projects with a total of 1.7 million US dollars.

He said this year alone, the US Embassy had supported 11 organisations with a total of 80,000 US dollars under the project, which was expected to make an impact on the beneficiary communities.

He said some of the conditions for accessing the grant was that the project should be initiated by a community or a Non Governmental Organisation; and it had to be sustainable. It also did not have to depend on the US Government for further support, he explained.

In a speech read on his behalf, the New Juaben Municipal Chief Executive, Mr. Kwabena Okyere-Kusi, expressed his appreciation to those who contributed to make the project successful towards creating a sustainable employment in a complete rural community.

Mr. Appiah Kweku Boateng, the Executive Director of 4-H Ghana, the implementing agency, said his organisation submitted a proposal on behalf of the Asekesu Community because it believed that it could help improve upon the livelihood of the people there.

He said his organisation, which was a youth focused group, trained the youth to acquire skills so that when they completed their education , they could use the skills to employ themselves and create employment for others.

Mr. Boateng said 4-H Ghana, which started in the Eastern Region with two clubs in Koforidua, in 2000, now had more than 700 clubs and reached more than 48,000 young people in five regions.

Ms Jane Kwapong of the Ministry of Gender, Children and Social Protection, urged the women to unite and appealed to the men in the area to support the women in the management of the facility to ensure it success.

Mr. Samuel Tettey Komlorm, the Assemblyman for Asekesu Electoral Area, appealed for the provision of a tricycle to help transport the palm fruits from the villages to the processing centre.

Ms Abigail Ghama, the Secretary to the Peace and Love Association, said with the provision of the oil palm extraction facility, members of the Association could produce more palm oil. She, therefore, appealed to the Municipal Assembly and other stakeholders to help the Association to find market for their produce.

She gave the assurance that the Association would ensure that its members produced high quality palm oil under the highest hygienic conditions without any additives or substances of adulteration.