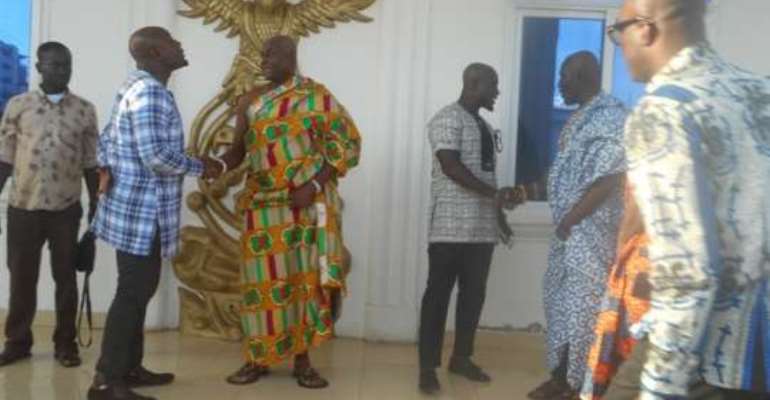 Accra, May 23, GNA - Nii Okwei Kinka Dowuona VI, the Osu Mantse has noted that elections should be used to educate and unify the people and not spark conflict.

'We should resist politics of conflict before, during and after election as politicians and followers and forge ahead in a common pursuit of peace and love,' Nii Dowuona who is also the President of the Osu Traditional Council said.

He made the remark when Stephen Appiah, the former Black Stars Captain paid a visit to him at his palace to invite him for the second leg game of the Vodafone Unity Match 2016, at the Accra Sports Stadium.

The former Black Stars captain had embarked on a tour to promote peace and unity among Ghanaians before, during and after election 2016, as the nation gets ready to elect a President and Parliamentarians in the November 7 polls.

Nii Kinka Dowuona said: 'We should not be divided by our political colours and affiliations.'

He assured Stephen Appiah of his support, adding: 'We are ready to help in any way we can to help prevent conflict and promote peace and unity.'

The former Black Stars captain expressed gratitude for the support to promote unity among Ghanaians before, during and after the elections.

The former Juventus player who is also a Peace and Unity Ambassador briefed the Chief on the preparations towards the match and the international players expected to participate in the game.

He said: "We have only one nation. We have no place to go, so we must all remain united before, during and after the elections. Football unites us and this motivates me to promote peace at the crucial time.