Now is the time to invest in Nigeria -Atiku 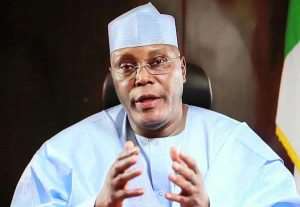 Former Vice President Atiku Abubakar has said there is no better time than now to invest in the Nigerian economy especially in the area of agriculture.

Atiku said this at the ground breaking ceremony of Rico Gado Nutrition Factory, in Abuja, on Saturday.

The former Vice President who has substantial interest in the agro-allied factory explained that while it remains true that the nation is currently facing economic challenges, it presents a big opportunity for investments.

According to him, he and his foreign partners were encouraged by the experience garnered in setting up a similar factory in Yola, the Adamawa State capital at the height of the Boko insurgency in the North East.

He said, “Despite the doubts about our economy because of current challenges, we are confident about Nigeria's future and about our future.

He recalled that in January 2015, he had the privilege of commissioning the 20 tonnes per hour Yola plant which is Nigeria's first multi-purpose animal feed mill.

Atiku noted that one of his friends asked if he thought it was a good idea to invest in agribusiness when he embarked on the venture in January 2013 to which he (Atiku) said, “I told my friend that I understood his doubts, but that I felt I had an obligation to help develop my town and my state and support the people.

“If we don't do it, who would? I also told him that my partners in the joint venture all agreed that the time was right, and that the place would do.”

The politician and businessman said the decision to establish the factory turned out to be a wise one because today, the factory is exactly what he and his partners had hoped for – an economically viable enterprise, and a catalyst for change.

Minister for Agriculture, Chief Audu Ogbeh in his remarks noted that investment in the sector would serve as catalyst for Nigeria's growth.

This, he said was because with a growing population, Nigeria can ill afford to be able to at least feed itself.

According to him, there are projections that by 2050, the nation's population will top 400 million with an ever increasing need for agro-allied products as well as direct and indirect jobs.

He called on Nigerian business men to emulate the former Vice President and invest in the sector.