'I’m Nowhere Near My Grave' – Akufo-Addo 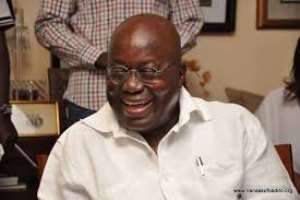 Nana Akufo-Addo has said contrary to "vile propaganda" that he is not far from dying, he is nowhere near his grave.

'They say I am an old man with one foot in the grave. But, here I am. I am OK. As for death, it’s up to the Almighty. We all don’t know when we will be called. What you see before you is a small man with a big heart for Ghana," he said in the Volta Region while worshipping with some churches to show appreciation to the region for hosting him during his four-day campaign tour.

The three-time flagbearer also beseeched Christians to pray for him so he becomes a good leader should he win the November polls.

Worshipping with congregants at the S.S Peter and Paul Roman Catholic Church in Aflao on Sunday, May 22, 2016, at the end of his tour, Mr Akufo-Addo urged the congregation to remember the New Patriotic Party (NPP) in their prayers, and “pray for victory for the NPP this year.”

“And please don’t forget your man-servant, Nana Addo Dankwa Akufo-Addo, in your prayers. Pray that the Almighty gives me strength, wisdom, courage and a compassionate heart to be a good leader,” he implored.

The NPP leader thanked the Chiefs and people of the region for the “exceptional welcome” he has received from them since he began his 4-day tour of the region.

“I am very grateful to all the people I have met for the wonderful welcome that they have given me and my delegation. May God bless you all,” he said.

The tour saw him visit Anloga, Keta, Adidome, Ave-Dakpa, Akatsi, Klikor, Agbozume and Aflao to interact with the Chiefs and people.

He told the congregation that his presence in the region was meant to “repair the relationship and close the gap between the Volta Region and the NPP”.

Describing 2016 as a critical year for the country, the NPP flagbearer explained that he is offering himself for the leadership of the country “because I believe I have something to contribute to making Ghana a much stronger and prosperous country, where there are jobs for our young people. That is why I am contesting for the leadership. I cannot succeed without your support. And, that is why I am here, to plead for the support of the Volta Region.”

He said with Pope Francis decreeing 2016 as ‘The Year of Mercy’, “we pray that the Almighty will show His Mercy to Ghana, and we pray for the peace and stability of our country. That he should show Mercy to the Electoral Commission, so they can conduct a free, fair and transparent election. If it is free and fair, the results can easily be accepted by everybody, so that there will be peace in our country.”

Chairman of NPP’s Volta regional arm, John Peter Amewu, on behalf of the party, donated 10 packets of roofing sheets to the church.

At the Global Evangelical Church – Victory Centre, Aflao, Mr Akufo-Addo, encouraged members of the church not to despair and lose hope, in the face of “mounting and severe economic difficulties” confronting the nation, under the leadership of President John Mahama.

“We, in the NPP, have the men and women to give this nation a first class government that will turn the fortunes of the country around and give Ghanaians a decent standard of living, because we are going to work honestly to solve the problems of our people,” he indicated.

The NPP flagbearer, at the church, donated an unspecified amount of money towards the Church’s building project.

Nana Akufo-Addo also worshipped at the Church of Pentecost, Aflao Assembly, where he urged the congregation to continue to repose their faith in God. He appealed to the congregation to vote for him and the NPP, in this year’s elections, stating that “trust me and try me, and I will not disappoint you.”

What's So Special About NAM1 That Akufo-Addo Is Shielding Hi...
25 minutes ago