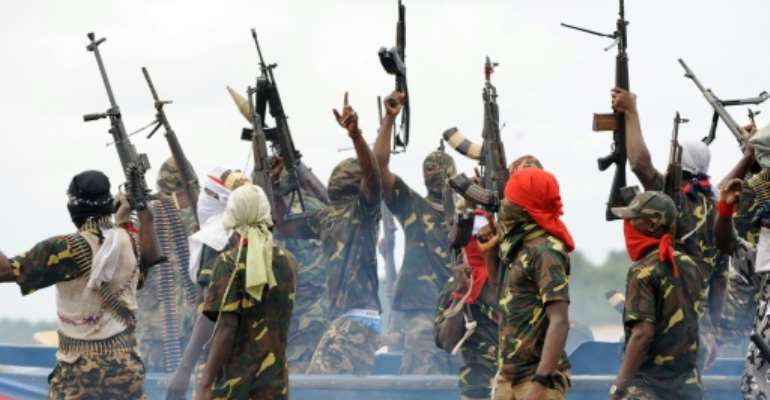 Fighters with the Movement for the Emancipation of the Niger Delta (MEND), pictured in 2008 in Warri, in Nigeria's oil producing Delta State. By Pius Utomi Ekpei (AFP/File)

Lagos (AFP) - Former militants in Nigeria's oil-producing south said Sunday they would not resume violence and distanced themselves from a new rebel group that has claimed recent attacks on pipelines and facilities.

An emailed statement purportedly from the Movement for the Emancipation of the Niger Delta (MEND) said it had "resolved to continue to respect the unilateral ceasefire of hostilities... against key economic interests of the Nigerian state".

MEND and its affiliates were involved in violence in the 2000s calling for fairer distribution of oil money that severely disrupted the sector until a government amnesty programme was introduced in 2009.

The group, which has largely been inactive since the amnesty, said it believed that President Muhammadu Buhari, who marks one year in office on May 29, "deserves more time to stabilise the country".

It criticised the former government of president Goodluck Jonathan, calling it "ill-fated, corrupt and visionless" and said it "ran (the country) aground", causing widespread poverty.

Nigeria has seen oil production cut to 1.4 million barrels per day, well down on the budgeted 2.2 million bpd, because of attacks claimed by the Niger Delta Avengers group.

On Friday, Buhari ordered enhanced security in the swamps and creeks of the delta region, after pipelines and facilities operated by oil majors including Shell, Chevron and Agip were targeted.

Buhari said the situation "threatens the national economy", already reeling from the slump in global crude prices that has slashed government revenue, and plagued by endemic corruption.

MEND said it wanted to "condemn and dissociate itself" from the activities of the Niger Delta Avengers, suggesting the group had emerged as "a tool by certain elements to destabilise the current government".

The Avengers are said to be sympathetic to Government Ekpemupolo, a former MEND commander widely known as Tompolo, who is wanted on multi-billion corruption charges.

Jonathan supporters have claimed Buhari's drive against corruption is a political witch-hunt as it has focused on senior figures from the main opposition Peoples Democratic Party (PDP).