Search on for clues in EgyptAir crash 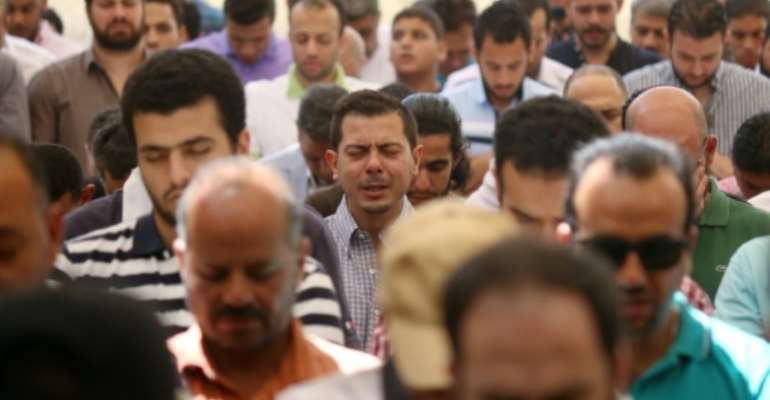 Relatives and friends of passengers of the EgyptAir plane that crashed in the Mediterranean at a mosque in Cairo. By Mohamed Meteab (AFP/File)

Cairo (AFP) - Three days after an EgyptAir flight plunged into the Mediterranean with 66 people on board search teams scoured the sea on Sunday for the bodies of the dead and clues on why it crashed.

The Airbus A320 was en route from Paris to Cairo early on Thursday when it plummeted and turned full circle before vanishing from radar screens, without its crew sending a distress signal.

Egyptian Foreign Minister Sameh Shoukry said the search -- which has already yielded "pieces of the aircraft, body parts, belongings of the deceased" will continue until the black boxes are found.

"The search is ongoing… It will continue hopefully until we can ascertain exactly where the plane has gone down and the effort to extract the black box and the data recording," Shoukry told CNN.

Asked about the reported smoke, he said: "I am not certain it can be conclusive. But it is certainly an important element in the jigsaw puzzle that has to be fully compiled."

What brought down the plane remains the main question. Egypt's aviation minister has said terrorism is more likely than technical failure. French Foreign Minister Jean-Marc Ayrault said "all theories are being examined and none is favoured".

The disaster comes just seven months after the bombing of a Russian airliner over Egypt's Sinai peninsula in October that killed all 224 people on board.

The Islamic State group was quick to claim responsibility for that attack, but there has been no such claim linked to the EgyptAir crash.

A rare audio message Saturday by the jihadist group's spokesman Mohamed al-Adnani made no mention of the doomed plane, although it called for attacks on the US during the Muslim fasting month of Ramadan which begins early next month.

A French patrol boat carrying equipment capable of tracing the black boxes was expected in the search area between the Greek islands and the Egyptian coast on Sunday or Monday.

But experts have warned that the equipment could be useless if the black boxes -- which can emit signals up to five weeks -- have sunk to a depth of more than 2,000 metres (6,500 feet).

French and Egyptian aviation officials have said it is too soon determine what brought down the plane.

It is "far too soon to interpret and understand the cause of the accident as long as we have not found the wreckage or the flight data recorders", a spokesman for France's Bureau of Investigations and Analysis said.

An Egyptian aviation ministry statement said it was too early to draw any conclusions based on a "single source of information such as the ACARS messages which are signals and indicators that may have different causes".

According to specialised aviation website the Aviation Herald, the ACARS messages read "smoke lavatory smoke" then "avionics smoke" -- referring to the plane's electronic systems -- then a "fault" with the FCU, the pilots' flight control unit in the cockpit.

The plane disappeared between the Greek island of Karpathos northeast of Crete and the Egyptian coast in the early hours of Thursday.

Seven crew and three security personnel were also on board.

EgyptAir Holding Company chairman Safwat Moslem told AFP on Saturday the priority was finding the passengers' remains and the flight recorders, which will stop emitting a signal in a month when the batteries run out.

"The families want the bodies. That is what concerns us. The army is working on this. This is what we are focusing on," he said.

On Saturday, a funeral service was held at a church in Cairo for 26-year-old EgyptAir hostess Yara Hany Farag, who was on Flight MS804.

In a hall inside the church compound decorated with flowers, a picture of a smiling Yara was placed on a cross covered entirely with white flowers: the young woman was engaged and expecting to be married in the coming months.