$250m Diversion A Mark Of NDC’s Incompetence And Corruption – Bawumia 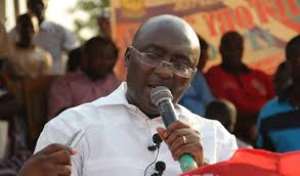 Dr. Mahamudu Bawumia, NPP Vice-Presidential Candidate, has noted that the diversion of $250 million from the Bank of Ghana to UBA, which was subsequently loaned to government through Treasury Bills, is another clear mark of the incompetence and brazen corruption of the current NDC government.

Dr. Bawumia made these comments on the UBA deal and the responses that have come from various government officials and NDC propagandists at the Navrongo Nursing and Community Health College on Wednesday.

Speaking to a packed auditorium, Dr. Bawumia once again recounted the circumstances around the raging scandal and how the government had borrowed a billion dollars from the Eurobond market, at a high interest rate, only for it to divert 250 million of the proceeds to a Private Bank under the guise of the Ghana Infrastructure Investment Fund (GIIF).

“The GIIF is not ready to invest in any project. So this money was lying at the Bank of Ghana all along. Suddenly in December last year, the Finance Minister and his colleagues decided that they are going to take this money at the Bank of Ghana, which we are paying 10.75% on, on the International Market, and transfer it to a Private Bank, which is the UBA.

“Now the interesting thing is that they had reached an agreement with the UBA, where they placed the money that UBA will pay them an interest of about 10% but UBA now turns back to lend the money back to government at over 20%. Have you heard of anything like this? You give someone money at 10% and borrow back that same money at over 20%? Have you heard this before?” he quizzed to loud responses of “No” “No” “No” from the audience.

“It is unbelievable. This transaction smells very fishy. This is what we call causing financial loss to the state – pure and simple”, he added.

Dr. Bawumia took on the various government officials who instead of protecting the public purse, as mandated, had come out in support of such a reckless transaction and noted that it is an indication of the fact that those in charge of the Ghanaian economy are clueless.

“When you have Ministers who come out to defend this type of transaction, then you know that the people who are in charge of this economy, do not really know what they are about because if you say the funds were idle and you were paying 10.75% on it, this transaction now means that we are paying over 20% because you are still paying the 10.75% internationally and also paying an additional 10% to the Bank”, he said.

Dr. Bawumia pointed out that even if it was the case that the Government wanted to buy Treasury Bills, the Bank of Ghana could have been asked to buy the Bonds without a need to transfer the money to a Private Bank.

“If you wanted to invest this money in Treasury Bills, why didn’t you just ask the Bank of Ghana to buy the Treasury Bills for you? Why do you have to lend the money to a Private Bank at 10% and borrow it back at 20%?”

“This is how badly this NDC government is managing our Economy. When you add incompetence to corruption, you have wahala. The equation is simple – Incompetence plus Corruption equals Wahala and this is why there is Wahala everywhere”, Dr. Bawumia stated.

Touching on the legality of the whole transaction, Dr. Bawumia noted that the constitution itself had been flouted in this deal and called for a Parliamentary Enquiry into the matter.

Dr. Bawumia pointed out that the claim by government officials that the transaction is lawful, as a result of powers granted by the GIIF Act, cannot hold because the constitution of the Republic in Article 183 (2) (b) clearly states that the Bank of Ghana shall be sole custodian of State Funds of Ghana unless the Bank authorises another body to act as such through the publication in the Gazette, which was not done in this particular case.

“The claim is that the GIIF Act gives the government the power to engage in this reckless transaction and they also claim now that they converted the money into cedis and so acted within the law, but what they forget is that the Constitution in Article 183 (2) (b) makes it clear that the Bank of Ghana shall be sole custodian of State Funds, so whether in Cedis or Dollars, the law has been flouted and no law can be superior to the Constitution of Ghana.

“Article 183 (2) (b) states – “The Bank of Ghana shall be the sole custodian of State funds of Ghana both in and outside Ghana and may, by notice published in the Gazette, authorise any other person or authority to act as a custodian of any such fund as may be specified in the notice”, he read, adding “this is what makes this transaction, illegal.”