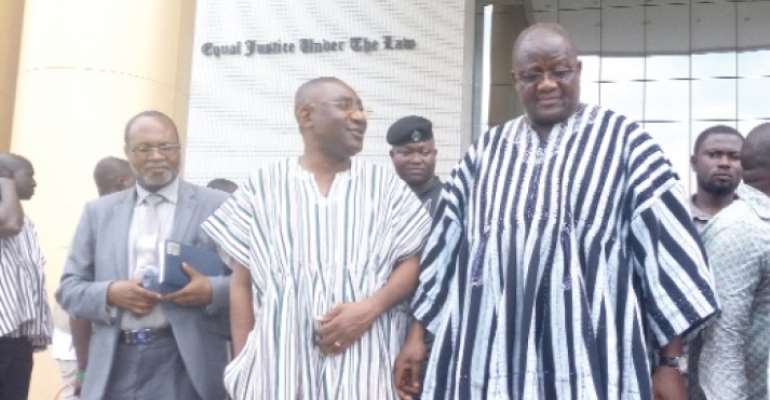 The legal battle between the suspended National Chairman of the New Patriotic Party (NPP), Mr Paul Afoko, and the party last Tuesday degenerated into accusations and counter-accusations at the Human Rights Court.

During cross-examination by the NPP's legal team, Mr Afoko accused leading members of the party of deliberately reconstituting its Disciplinary Committee (DC) with the sole aim of hastening his suspension.

Lead counsel for the NPP, Mr Godfred Dame, on the other hand accused Mr Afoko of breaching the party's constitution with regard to the submission of names of people who would serve on the DC.

'The constitution requires that there will be at least two women on the DC, but you submitted the name of only one woman. This was part of your plan to ensure that the committee was not duly constituted,'' he stated.

Stick to the issues
The discourse did not go down well with the presiding judge, Mr Justice Anthony Yeboah, who ordered the two sides to stick to the issues and not indulge in personality attacks.

'Stick to the issues that were agreed upon for this trial. I don't think it is fair to attack people's motive. If you attack the other, then you should expect to be attacked. We can play this game if that is what you want,'' he said.

He also ordered the deletion of the statements by the two sides from the court's records.

Suit
Mr Afoko went to court in December last year claiming the processes that were used to suspend him were not in tandem with the party's constitution.

Joined to the suit are the NPP and its acting National Chairman, Mr Freddie Blay.

Disciplinary Committee
One of the bones of contention in the trial is the appointment of Mrs Gifty Kusi, the Member of Parliament (MP) for Tarkwa-Nsuaem, onto the DC.

The plaintiff claimed Mrs Kusi's appointment to the committee was unconstitutional.

During the cross-examination, Mr Dame claimed the MP was appointed onto the committee to ensure gender balance as stipulated by the NPP's constitution.

Mr Afoko refuted counsel's assertion, claiming Mrs Kusi was not properly appointed and her appointment was just to help the committee form the quorum required to ensure his suspension.

According to him, at the time a petition requesting his suspension was made, the committee lacked the quorum to investigate the petition.

'Four members of the committee for various reasons were not attending its meetings. Mrs Kusi's illegal appointment was not intended to rectify the gender provision but to help form the quorum of five members the committee needed to work on the petition against me,'' he argued.

That claim was refuted by Mr Dame, stating that the appointment of Mrs Kusi was never intended to help the committee form a quorum.

'This is because there were six people who sat on the petition leading to your suspension and also your allegation of the unconstitutionality of Mrs Kusi's appointment was never brought before the National Council of the party,' he asserted.