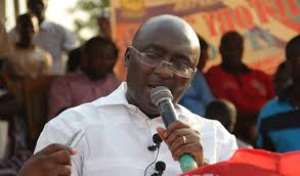 The former Deputy Governor of the Bank of Ghana has been accused of deliberately releasing very alarming statements to create unnecessary panic within the business and investment community.

The deputy minister is therefore calling him to seek clarification on issues before “misinforming” students or running to the Press. Mr. Forson who was reacting to Dr. Bawumia’s recent allegation that government had diverted 250m of the one billion dollar Eurobond into a private account for the 2016 campaign said the NPP vice Presidential candidate timed it to coincide with the arrival of the IMF assessment team.

“Most often, Dr Bawumia and the NPP activists do these things deliberately to throw dust in the eyes of the public. But they must realize the larger implication because investors listening to their comments and the subsequent debate about the economy react accordingly. I urge them to seek clarification first.

“First I heard many of them referring to the 2015 Eurobond. But that is false. The amount was taken from the one billion dollars raised on the market in 2014. The prospectus was clear on $250 million to be set aside for the Ghana Infrastructure Investment Fund. The law that established the GIIF is clear. The managers have the mandate to invest and I can say on authority that it was the cedi equivalent that was lodged at the UBA account,” he told host of Accra-based Okay FM’s morning show, Kwame Nkrumah Tikese.

Mr. Forson expressed disappointment in Dr Bawumia who he said ought to know better.

“The Bank of Ghana does not pay interest on government money. In other countries, the Central Banks pay interest and we intend to review the existing law.

“If the money is at the Central Bank for almost two years and is not yielding any profit, is it wrong to GIIF to plough it to yield fruit under the regulations establishing it,” he asked.

He challenged the NPP vice Presidential candidate to read the laws establishing the Ghana Infrastructure Investment Fund. He argued that it is an independent body and will be operating on many projects.

Dr Bawumia, he said has in the past, spell doom for the local currency, the Cedi and his comments led to speculative buying further weakening the currency. The economist has been heavily criticized by government after his lectures on the economy was found to "contain inaccuracies" on the total national debt and other policy interventions by government.

The minister also clarified the opportunities that come with the latest IMF positive rating after the third review of its Extended Credit Facility.

He emphasized that Ghana’s credit curve has rallied notably over the last few days benefitting from a more conducive market backdrop.

“While all the African bonds have rallied in recent days by one percentage point, Ghana has outperformed them by rallying three percentage points since the announcement of the IMF’s review, reflecting investors’ positive response to the review” he added.

On Monday, the Governor of the Bank of Ghana, Dr. Abdul Nashir Issahaku dismissed Dr Bawumia’s allegations that the Ministry of Finance contravened section (53) of the BoG Act 612 when it transferred 250 million dollars of the 1 billion dollar Eurobond proceeds to a private account.

Dr. Issahaku maintained that the Finance Ministry did not flout the rules, “I think from our stand point here, all government foreign exchange has to be in the custody of the Central Bank and when government need their money, they take the equivalent in cedis”.