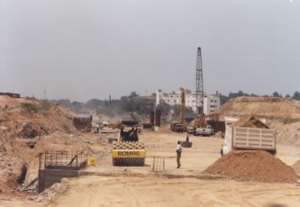 He was reacting to allegation made by the former first lady at a news conference organized by the 31st December Women's Movement that he (Kufuor) had 35 per cent shares in the construction firm, Sonitra, saying that there is no iota of truth in that allegation.

He said if she couldn't come out with the truth; she better shut up and not come to foul the country's political atmosphere with spewing lies.

He said politics of hate; vindictiveness and outright lies about opponents should be a thing of the past, so that in unison the country would be welded together.

In an interview at his residence, president Kufuor said there was no contract that Sonitra won without going through normal tender procedures.

He indicated that the Tetteh Quashie inter-change, the Mallam-Winneba road and others that were won on open tender are bineg constructed by Sonitra.

According to the president, while in opposition, he heard many wierd stories about other expatriate construction firms like Taysec, but his government has been giving this firm contracts and commended it for its tradition of good quality work in the Ashanti and Brong Ahafo Regions for instance.

In some other road contracts, he noted that Taysec was working alongside Sonitra just as the other expatriate firms like Taisei, working on the Winneba road was also sub-letting some of its contracts other contractors, be they expatriate of local.

Asked about Construction Pioneers (CP), he made it clear that he would have wished not to talk about it.

He therefore threw the challenge for journalists to find out if CP was not getting contracts and what the reasons.

NDC Prepared And Sprayed Concoction On NPP Agents At A Regis...
3 hours ago

Dozens Of Ivorians Arrested For Participating In Voters’ Reg...
3 hours ago