Tobacco Control Must Be A Priority For Health Professionals 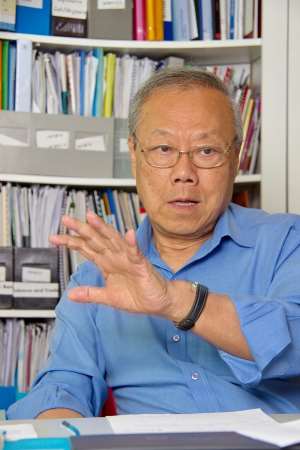 (CNS): As lung cancer treatment outcomes are difficult and five-year survival is abysmally low, preventing lung cancer is a top public health priority. Up to 90% of lung cancer cases are because of tobacco use. Therefore effective implementation of evidence-based and comprehensive tobacco control policies will make a huge difference in slashing new cases of lung cancer as well as preventing a large number of other diseases, disabilities and premature deaths attributed to tobacco use” said Professor (Dr) Prakit Vathesatogkit, Executive Secretary of Action on Smoking and Health Foundation of Thailand.

IASLC Asia Pacific Lung Cancer Conference (APLCC 2016) is being held in Chiang Mai, Thailand and CNS (Citizen News Service) is the official media partner of APLCC 2016. Prof Prakit was one of the plenary speakers at APLCC 2016.

He added: “Out of the 50,710 tobacco related deaths occurring in Thailand every year, 11,740 or 23% were because of lung cancer. In ASEAN region, it is estimated that out of the total 467,194 smoking related deaths every year, 107,454 were due to lung cancer. Tobacco-related lung cancer deaths will keep growing in catastrophic proportions with ageing 121 million smokers in ASEAN region if we fail to act now. Also it is important to underline that tobacco related lung cancer rate might shoot up because of the combined effect of tobacco industry’s aggressive marketing, weak political will on tobacco control and other key factors. Therefore while making progress in treatment of lung cancer is very welcome, more contribution from healthcare workers in tobacco control is direly needed.”

PROF PRAKIT WALKS THE TALK! Prof Prakit Vathesatogkit himself has lived by example of how health professionals can contribute to tobacco control in their lifetime. In his 40 years as a lung disease specialist, he spent first 10 years in clinical management of lung diseases, of which smoking was the major and common cause! He was left aghast not only with late diagnosis of lung cancer but also to see abysmally low cure rates for lung cancer cases.

Also available treatment was within reach to only a few of his patients. He finally decided to join the brewing tobacco control movement 30 years ago and learnt by doing. He has indeed set an example for others to imbibe. He has contributed on tobacco control related policy advocacy and then engaged with legislative processes in Thailand. His leadership in tobacco control in strengthening the global tobacco treaty (formally called the WHO Framework Convention on Tobacco Control or WHO FCTC) is well acknowledged.

Health professionals including lung cancer experts have a prominent role to play in tobacco control. They have the trust of the population, the media and opinion leaders, and their voices are heard across a vast range of social, economic and political arenas.

“At the individual level, they can educate the population on the harms of tobacco use and exposure to second-hand smoke. They can also help tobacco users overcome their addiction. At the community level, health professionals can be initiators or supporters of some of the policy measures described above, by engaging, for example, in efforts to promote smoke-free workplaces and extending the availability of tobacco cessation resources.

At the society level, health professionals can add their voice and their weight to national and global tobacco control efforts like tax increase campaigns and become involved at the national level in promoting the WHO FCTC. In addition, health professional organizations can show leadership and become a role model for other professional organizations and society by embracing the tenants of the Health Professional Code of Practice on Tobacco Control” said Prof Prakit Vathesatogkit.

Physicians, nurses, dentists and pharmacists and all health professionals in the everyday health-care setting need to address tobacco dependence as part of their standard of care practice.

The Treating Tobacco Use and Dependence - Clinical Practice Guideline, issued by the United States Department of Health and Human Services recommends the 5As approach:

Prof Prakit said: “In 2002, through the 6th Health Ministers Meeting, ASEAN governments committed to a vision and a “Regional Action Plan on Healthy ASEAN Lifestyles”. Identifying tobacco control as one of the priority policy areas, the Action Plan calls upon member nations to implement a Programme of Work on promoting healthy ASEAN lifestyles. For tobacco control this includes developing and implementing a national action plan, consistent with the World Health Organization's Framework Convention on Tobacco Control (WHO-FCTC) on issues such as smuggling, taxation, product advertising, distribution, sale and agricultural production.”

There are other actions that have been taken by governments in this region too. In ASEAN (see box), apart from Indonesia every other country has signed and ratified the global tobacco treaty (WHO FCTC). Recognizing tobacco as the major and common risk factor for range of life-threatening diseases including lung cancer Health Ministers from 11 countries in the Southeast Asia region had signed the Dili Declaration in September 2015 pledging to accelerate hard-hitting measures to reduce tobacco use.

Summarises Prof Prakit Vathesatogkit: “At the very least, all healthcare personnel must provide brief advises for smoking cessation to every patient who has a smoking history, in every consultation visit. Worldwide, doctors are among the most influential figures in leading the tobacco control movement. I urge all doctors to join and support tobacco control movement, not just by a supportive gesture but by action, in whatever capacity they feel comfortable.”