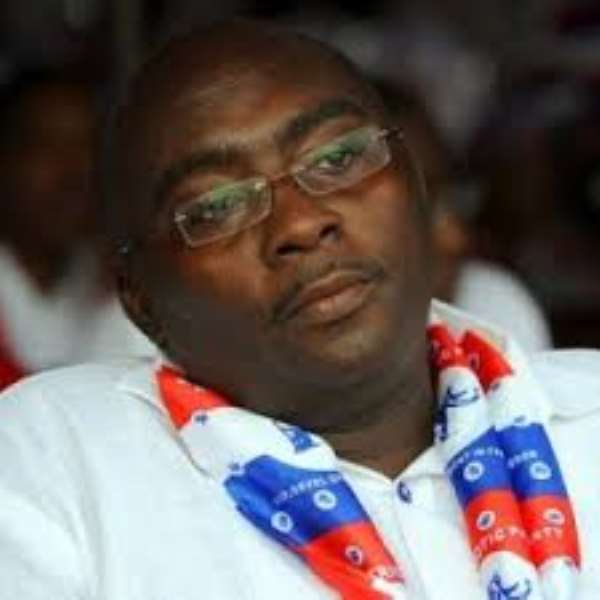 As I was concluding my first article in response to a lecture my big brother, and celebrated economist, Dr. Bawumia delivered at Accra Polytechnic, I came across his reply to the Finance Minister’s response to the claims he made in his (Dr. Bawumia’s) lecture; immediately, I saw the need for a follow up response, and as such promised to do so.

Before I progress, let me make something clear here. There are some few people who think they can insult and or threaten me to silence – to you all, please find points to counter my write-ups and stop the empty threats and uninformed pronouncements. In my world, there is nobody beyond challenge, I mean nobody. Now back to the issues.

To begin with, the students who listened to Dr. Bawumiya, the Ghanaian community and in fact even the international community deserve an apology from him for two areas he misinformed us on in his speech. Indeed, I expected that apology in his response, however, he just ignored those two areas and went on to defend other parts of his speech that is yet to be dismantled.

The second area we need an apology for, was the efforts of the Dr. to mislead Ghanaians that the $250 million seed money for the “GIIF” was from the Eurobond issued in 2015. If you do not follow these issues, you will not understand why the date is important. The 2015 Eurobond was issued to refinance domestic debts; as such, taking part of it as seed money for the “GIIF” would have been contradictory to what the government stated as the purpose for issuing the bond – this would have been reckless, just as Dr. Bawumia wanted to make us believe.

Thankfully, the money came from a Eurobond that was approved by parliament in 2014 to help government source funding for the 2014 infrastructure budget. You can all see that taking money from money meant for infrastructure budge as seed money for Infrastructure Investment Fund is very perfect. Since this has been clarified to Dr. Bawumia, he needs to accept his mistake and apologize to Ghanaians. Again, he remained silent and never refuted the clarification that the money is not from the 2015 Eurobond. We equally deserve an apology for this sir.

Now back to the explanations provided to counter the Finance minister’s explanations. My big brother claimed that the transfer of the money violated section 53 of the Bank of Ghana Act 2002 (Act 612). Sir I disagree with you. Your failure to understand that the GIIF fund is independent, can hold its resources and invest them in any kind of investment is what led you to this conclusion. Because of these powers extended to the fund, immediately the money is allocated to it, it seizes to be part of the foreign exchange reserves – because in the first place, these reserves cannot be kept in the name of any individual or agency but the Central Bank. Since there is an act of parliament that gives the Fund the power to hold its own account for the purpose of the Fund, this money is not subject to section 53 of the BoG Act. Please take time and read the “GIIF” Act, 2014 (Act 877) Section 6. In fact and perhaps for clarification purposes, this section is labeled as “Bank Account of the Fund.” If indeed transferring money for the Fund to its bank account is in violation of section 53 of the BoG Act, then Section 6 of the “GIIF” Act 2014 (Act 877) should be completely taken out; because it will be useless.

Secondly, you mentioned that “Beyond the issue of legality, there is the issue of prudence in the management of Ghana’s resources. How do you go and borrow money for 10.75% (US dollar) and give it to someone to lend it to you at over 20% (GHC)? In effect you are paying over 30%! Assuming stable exchange rates, Ghana will be paying additional interest of at least $50 million a year on this transaction. It really is reckless.”

Sir, with all apologies when you say things like this, you mislead your followers to think that is actually what happened – when it is complex than this. Let me clarify this a bit.

The government did not borrow money and give it to a bank, and then borrow it from the Bank again - this does not even make sense. What happened is that, the government borrowed money, gave some of it to the GII fund as seed money. Because the Fund has the power to invest, it decided to deposit the money at a Bank to earn interest. The bank that keeps this money then bought government treasury bills on which the government will pay the bank interest of 20%. I hope this is clear now? That is the basic explanation to what happened!

Also, on the interest rate, the 20% the government is paying and what the deposit is earning are two different things that need not be mixed to confuse Ghanaians. Sir, you have succeeded in making Ghanaians believe that the treasury bills the bank bought from government happened because of the money that was deposited there – but honestly, you know that is not the case. The transaction that involves the investment of the Fund’s money at the Bank is completely different from the transaction that resulted in the Bank’s purchase of treasury bills. Why are we mixing these two issues to confuse Ghanaians?

The question we should be asking is whether the Fund’s investment decision is prudent. Questions like, could the fund get a return somewhere that is greater than the current 11% it is earning on the deposit? But netting the Treasury bill’s interest expense and that of the $250 million is simply not the case. The interest earned on the deposit which according to the Finance Minister stands at $23 million would be used as part of the assets for the Fund just as the government will pay interest to the bank for the treasury bills it bought – the two are completely different transactions.

I must make it clear that I have my own reservations as to whether depositing the money at United Bank of Africa (“UBA”) was legally right – but obviously not where my big brother is coming from. I think the “GIIF” Board of directors could face issues regarding conflict of interest since the Chairman of the Board Mr. Ato Ahwoi is a brother to Kwamena Ahwoi who is a board member of the Bank. That is another issue to discuss!

In conclusion, there is nothing illegal about the transfer of the funds from the Central Bank to a Bank account owned by the Fund. That is completely in line with section 6 of the 877th Act of Parliament that established the Fund. Perhaps, someone needs to take this issue to the court to test the waters.

To those who think one must hold a PhD to contribute to the development of Ghana, I disagree and shall continue contributing and giving my views no matter who is involved.