Dzifa Attivor under fire; but she defends statement 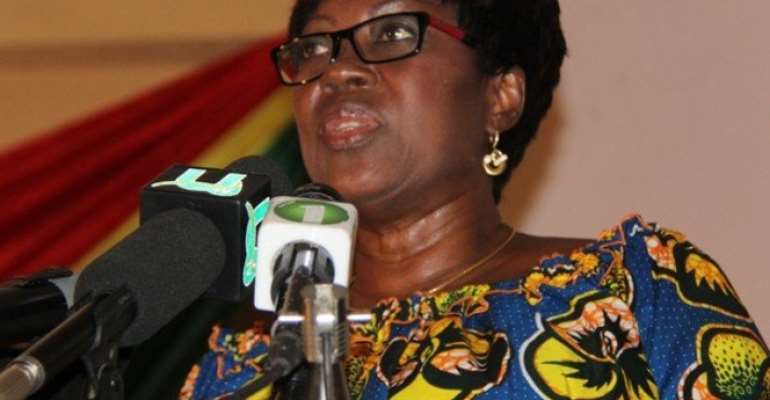 What began as a scathing attack on the opposition New Patriotic Party (NPP) has landed a former Minister of Transport, Mrs Dzifa Attivor, in a quagmire, with various sections of the public condemning her remarks as divisive.

Until she impressed on the electorate in the Volta Region to vote for the National Democratic Congress (NDC), since a vote for the NPP would mean a jail term for all NDC ministers, Mrs Attivor was almost forgotten and resting in solitary confinement after her resignation.

But a statement attributed to her on a campaign platform during the launch of a group, 'Ketu South for Fifi and Mahama', at Wodoaba in the Ketu South District in the Volta Region, has attracted a barrage of attacks on her, even from her own party.

Quick reactions have come from the National Peace Council, former President Jerry John Rawlings, the Volta and Greater Accra regional branches of the NDC, among other groups and personalities.

She is reported to have told the party members that the fate that befell some NDC top guns from the region still held true for any Ewe in the current government and that what stood between her and prison was the Volta Regional vote.

'I want to remind you that it is your vote that will decide if Fifi Kwetey and I will be prosecuted and put behind bars or not,' she reportedly said.

Pointing to the record of the NPP government between 2001 and 2008, Mrs Attivor said the NPP targeted only members of her ethnic group for prosecution, citing the imprisonment of the late Victor Selormey, a former Deputy Minister of Finance, and Mr Dan Abodakpi, a former Minister of Trade, who were both incarcerated for causing financial loss to the state.

Reaction
But speaking to the Daily Graphic last Wednesday, Mrs Attivor said her statement on the political platform was not meant to incite any ethnic group against another or cause disaffection for any group of people in the country.

'I was only reminding our people (Voltarians) about the historical antecedents of the United Party (UP), as well as its descendants the NPP which is known to have a strong aversion for the people of the Volta Region,' she said.

According to her, what she said did not suggest that she feared she could be jailed in the 'unlikely event the NPP took power in the November polls'.

She said she did not make any negative comments against any ethnic group in the country, adding that it was her right to rally her people to 'protect their dignity and common identity'.

She said she did not commit any crime as a minister in the NDC government and even outside government to harbour any fears or apprehension.

Condemnation
However, the National Peace Council, the statutory peace institution, has stated that the comment by the former minister does not even help the NDC and asked Mrs Attivor to retract and apologise for what it describes as her tribal comments.

'If you want to give the impression that when you do something wrong it is a different party that will deal with you, then you are not saying anything good about your party,' the Chairman of the council, the Most Rev. Prof. Emmanuel Asante, said.

The council also said the comments made sought to pitch the NPP against supporters of the NDC in the Volta Region and did not augur well for decency in politics and peace in the country.

Rawlings
Former President Rawlings, the Founder of the NDC, has also condemned the comment the former Minister of Transport is purported to have made.

'I find it distasteful that aside from making ethnocentric references accusing the NPP's presidential candidate of being tribalistic, she also insinuated that because I am the Founder of the NDC, the electorate in the Volta Region should vote for the party on that basis.

'Before making such unfortunate statements, let's remove the logs in our own eyes. I do not subscribe to the politics of ethnic bias and never have.

'While I may not be a fan of the NPP, I know its presidential candidate is not tribalistic or ethnocentric. Whatever Nana Akufo-Addo's shortcomings, tribalism is not one of them. Some known and respected Voltarians like Nutifafa Kuenyehia should be able to testify to his political nature,' former President Rawlings said in a statement.

He said as Ghana drew closer to the next presidential and parliamentary elections, what Ghanaians expected from the political parties involved in the process was for the parties to base their arguments and campaign rhetoric on the truth and desist from emotional and non-factual statements, 'especially where my name has to be mentioned'.

The NDC Founder asked the electorate not to allow immature behaviour and pronouncements to cloud their judgement.

'It was not properly made and the understanding has come out wrongly. By narrowing it down, I think it was not proper and that she can retract that statement,' he said, urging the various political parties to shun political vindictiveness when they gained the mandate to govern the nation.

In refuting the statement allegedly made by Mrs Attivor, the Volta Regional Chairman of the NPP, Mr John Peter Amewu, said on Accra-based Okay FM: 'It is unfair and not nice that somebody very much respected and of a high calibre would, all of a sudden, lose her credibility that has cost her so many years to gain.'

Mr Amewu stated that government officials from different ethnic groups were tried by competent courts of jurisdiction and so Mrs Attivor's assertion could not be true.