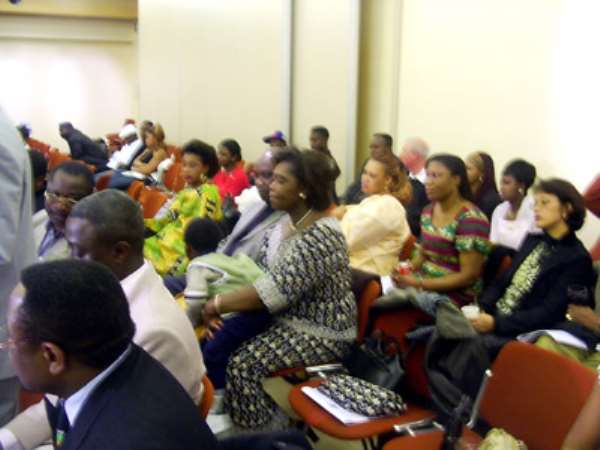 Brussels, 20/12/04 -- As part of its efforts to bring together all sections of the Ghanaian Community in Belgium, the National Federation of Ghanaians Resident in Belgium, popularly known by its acronym GHANABA organized at the weekend a special pre-Christmas party in Antwerp. This event rounded off the Federation's activity for the year 2004. It was specially organized in Antwerp to promote the Ghanaian culture in the Flemish part of Belgium

The main attraction for the evening was the Ghanaian musical maestro Nana Acheampong and his band that mesmerized the crowd with some popular tunes. They enchanted the audience with a variety of splendid hip-highlife and reggae tunes.

Due to the short interval between the date of the event and the official announcement, we could not reach some of our brothers and sisters in the other cities like Gent, Leuven and Turnhout. So the attendance was a bit less than expected. It however did not diminish the performance of Nana Acheampong nor the fans as they took to the floor to dance to the tune of songs like 'Na meye no more' and some of his latest songs.

Addressing the gathering, special guest of Honor for the evening, His Excellency the Deputy Ambassador, Mr. C.C. Kotey, extended on behalf of His Excellency the Ambassador, Mr. Kobina Wudu and his staff a warm Christmas and New Year's greetings to the Community. He acknowledged the cordial relationship established between the Embassy and the Community and pray for continuity in the coming year. He was thrilled by the good work the federation has been doing within the community and especially for being a facilitator of investment between Belgium and Ghana. He commended the leadership for securing 320, 000 Euros to finance a four year agricultural project in Ghana