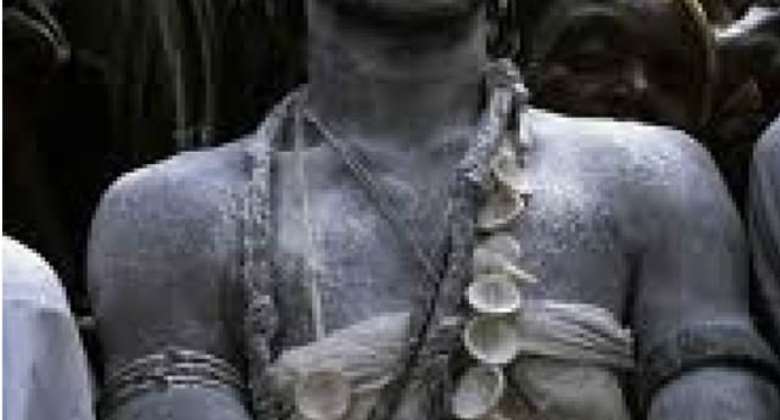 A furious old fetish priestess, 42, who walked into a church in Sekondi-Takoradi, to challenge the head pastor for preventing her from carrying out her spiritual assignment has been converted to Christianity.

The fetish priestess, who gave her name as Tawiah, and hails from Offinso in the Ashanti Region, bumped into the Prayer of Breakthrough Ministries International Church auditorium at Butumagyabu, near Takoradi, to engage the church members in a spiritual battle.

The fetish priestess claimed that the consistent prayers of the church members had prevented her from successfully carrying out her spiritual assignment in the vicinity.

The priestess, who was wearing a smock and talisman around her body first came to the church last Sunday, April 17 during church service, to exchange words with Bishop Prince Kweku Asare, the Founder and General Overseer of the Church, and warned that she would fortify herself spiritually and return on Wednesday, April 20.

True to her words, Okomfo Tawiah returned on Wednesday, April 20, around 2030 hours, but this time, in a red outfit with charms around her neck and waist and carried a pot.

The Church Spokesperson, Pastor Cecilia Nickson, told the media, in Takoradi, on Thursday, that because of the first confrontation last Sunday, the church members fasted and prayed for three days in anticipation of her return.

Therefore, when the priestess came, they met her with fervent prayers while she also recited incantations until she finally succumbed to the power of God.

Afterwards, the fetish priestess confessed that she was actually assigned to kill a man in the vicinity who came to her shrine for help and had refused to redeem his promise to the shrine.

Galamsey fight: Godfathers have disowned their child but wil...
58 minutes ago