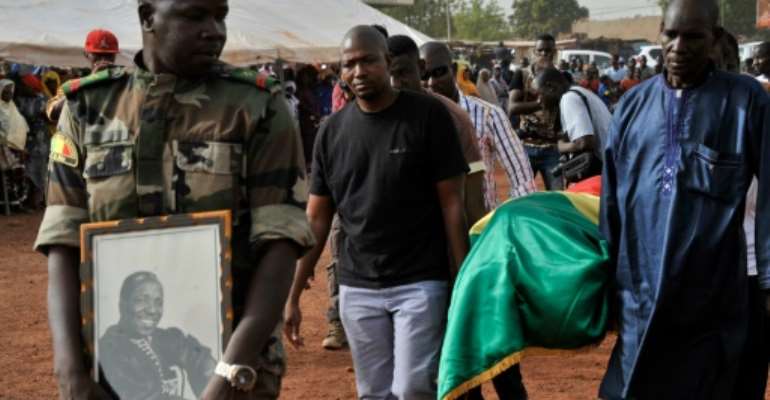 The send off for Malian photographer Malick Sidibe, whose coffin was draped in the national flag, took place in a working class neighbourhood of Bamako, with soldiers giving the iconic artist full honours. By Habibou Kouyate (AFP)

Bamako (AFP) - Hundreds of mourners gathered in the Malian capital to pay their final respects to the late photographer Malick Sidibe, who won international acclaim with his vibrant black-and-white images which captured daily life in his native country.

The send off for Sidibe, whose coffin was draped in the national flag, took place on a football pitch in a working class neighbourhood of Bamako, with soldiers giving the iconic artist full honours as in the crowd several women began weeping.

Young Malian photographers in attendance expressed their sadness at the loss of a mentor.

"It was Malick who bought me my first camera. He was really our guide."

After the 80-year-old's death was announced Friday, France's Culture Minister Audrey Azoulay hailed him as "the father of African photography".

Sidibe's vibrant images of life in the Malian capital in the 1960s, when the country gained independence from France, were a social commentary chronicling both pop culture and traditional society.

He captured candid images in his studio as well as on the streets of Bamako, including at nightclubs, beaches and sporting events.

He was the first African to have a solo exhibition in Paris's prestigious Grand Palais museum, and his works adorn the walls of the Museum of Modern Art in New York, the Getty Museum and several more across the world.

"Malick Sidibe showed us the unity, but also the diversity, of Mali through his art," she said, visibly moved.

Alpha Diallo, a photographer from neighbouring Guinea who was at the funeral, said "Mali, Africa and the entire world have lost a cultural titan."

And Sidibe's younger brother Tieoule Sidibe recalled how his sibling had been "the pillar of the family who helped all members of the community."

After the funeral the coffin was to be transferred to the village of Soloba, where Sidibe will be buried alongside other family members.

"You can never dream of coming so far when you're from a small village and never went to school," the photographer said on hearing in 2009 that he had been awarded the top prize at Spain's prestigious PhotoEspana festival.