Be on the look out for "Runaway" Contractors - Minister tells engineers 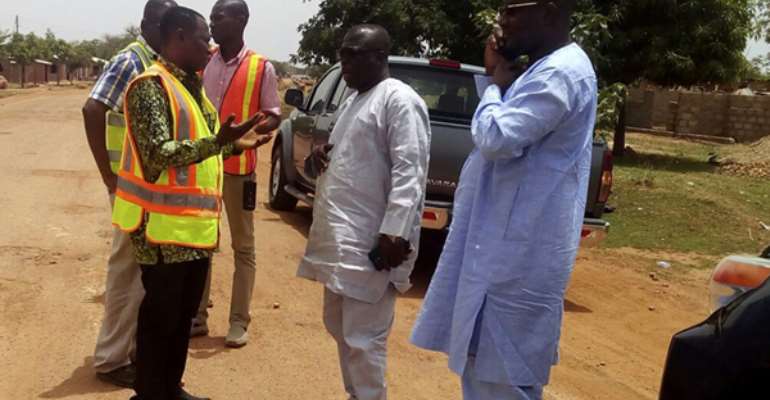 Regional Minister for the Upper East Region ,Hon Albert Abongo has urged Engineers in the Region to be on the look out for Contractors who have abandoned and carried out shoddy works to be taken out in biding for Contracts.

According to him,the nature of trucks which ply the roads in the Region demands that Contractors carry out quality work especially in the construction of culverts but he has realised that some works on the roads are poorly done.

The Minister made these assertions when he inspected some roads under both the Feeder Roads and Highways in the Bongo District.

This is the first part on the inspection of the road network in the Region with technical persons for the Minister to inspect the state of the roads in order to push for the maintenance of those roads.

Hon Abongo who is also an Engineer by profession indicated that the last two rainy seasons had affected the roads through floods causing serious deterioration to the roads hence the need to move swiftly with the technical persons otherwise some of the affected sections would be cut off in the next rainy season.

Stephen Quainoo oe said under the rehabilitation of roads ,estimates have been prepared and already forwarded to the ministry of Roads for approval whiles they carry out some minor intervention under the routine maintenance for 2016.

He said the projects have been advertised and at least four culverts would be constructed on the Yorigo-Borigo Feeder Roads in the Bongo District. But a Double 1200×900 culvert would be constructed as an interim measure on the broken bridge whiles waiting for the rehabilitation which is a major activity to take place.

Mr Quaimoo added that a 2km road would be tared from the police station to Gorigo and another 2km tared road from the District Assembly to Borigo under the District Town Roads project Phase II adding estimates have been submitted on the washout which have occurred on the Bongo -Balungu road and bridge.

Meanwhile, the Regional Manager of the Ghana Highways Authority Mohammed Abdallah has said projects estimates have already been sent to the headquarters but additional estimates would have to be prepared for approval as a result of the deteriorating nature of the roads .however, two Contractors are currently on the highways roads for maintainable works .

The Upper East Regional Minister would be inspecting other road networks in the Region subsequently.