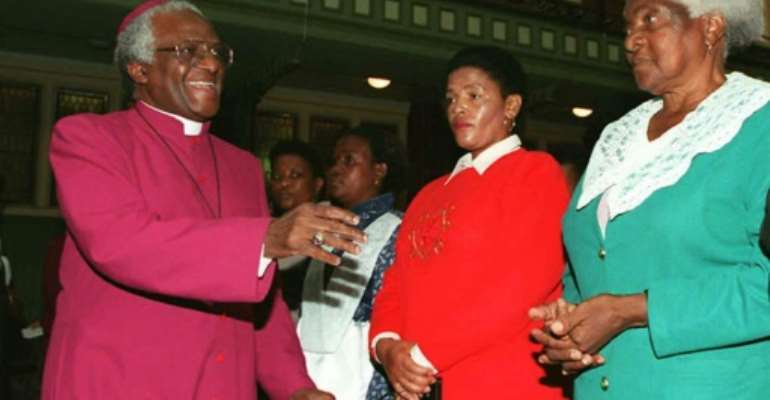 South Africa's Archbishop Desmond Tutu (L) greets witnesses at the start of the second day of the Truth and Reconciliation Commission in the East London. By Philip Littleton (AFP/File)

Johannesburg (AFP) - South Africa's Truth and Reconciliation Commission was meant to be the healing balm for a nation traumatised by the horrors of apartheid.

But 20 years later, hundreds of political crimes including murder, kidnapping and torture remain unpunished -- and many blame the post-apartheid government for the delay.

The commission's first public hearing on April 15, 1996 -- two years after the end of white minority rule -- was a solemn affair, met with both hope and apprehension.

In a packed town hall in the coastal city of East London, TRC chairman and Nobel peace laureate Archbishop Desmond Tutu lit a candle, and the shocking testimony of atrocities committed during apartheid began.

Police hit-squads targeting government opponents, torture, gruesome executions, a student thrown from an aircraft: by the second day Tutu dropped his head in his hands and wept.

In exchange for full disclosure before the commission, police officers, soldiers and ministers could be granted amnesty for their political crimes.

It was a revolutionary concept, devised to steer a country on the brink of chaos away from civil war, and it has since been replicated in several other countries.

More than 300 cases were recommended for prosecution when amnesty was denied. But two decades later, many of those remain untouched.

"Less than a handful of these cases have been pursued," said Tutu later, decrying the commission's "unfinished business".

"The fact that parents go to the grave without finding out what happened to their loved ones is unforgivable," lawyer Howard Varney told AFP.

"The fact that a government that represented the force for liberation and democracy has turned its back on its own people is equally unforgivable."

Thembi Nkadimeng, whose sister Nokuthula Simelane was abducted and tortured in 1983, calls it a "betrayal by the government".

When her family embarked on a mission to find out the truth behind her death, they hit repeated dead-ends -- including the disappearance of the case file.

"It was just one excuse after the next," said Varney.

"From the outset when we were pushing for action to be taken, we were told there was an effective moratorium in place on these kinds of cases going forward."

"When they eventually did start to investigate, it then became a never-ending investigation."

Four former police officers who appeared before the TRC were finally charged with Simelane's murder this year, but only after a high court compelled the national prosecuting authority to make a decision on the matter.

The trial is set to begin on July 25 and has sparked new hope among families of other victims, like that of Neil Aggett, a white doctor and trade unionist who died in 1982 after being tortured while in custody in a Johannesburg police station.

His alleged tormentor never applied for amnesty and, despite the TRC findings against him, has never been prosecuted.

"What makes me so angry and upset is that 20 years after Neil's death, he was still running an incredibly successful business in Johannesburg," Aggett's sister Jill Burger told AFP.

"And most of his clients were government departments."

The prosecuting authority told AFP it was investigating why these cases were taking so long to conclude, adding that they were "very complicated" as many had to be started from scratch.

But there's more to it than that, say those lawyers still pushing for justice.

"How many people collaborated with the former state? I think the political will is linked to the question: is there complicity?"

Old and new regimes "have to protect each others' backs", said Marjorie Jobson, director of Khulumani, a support group for victims and survivors of apartheid crimes.

"The TRC did serve the purpose of ending most of the denialism of white south Africans about the atrocities that happened. But it did not deal with justice for the people who were harmed by apartheid."