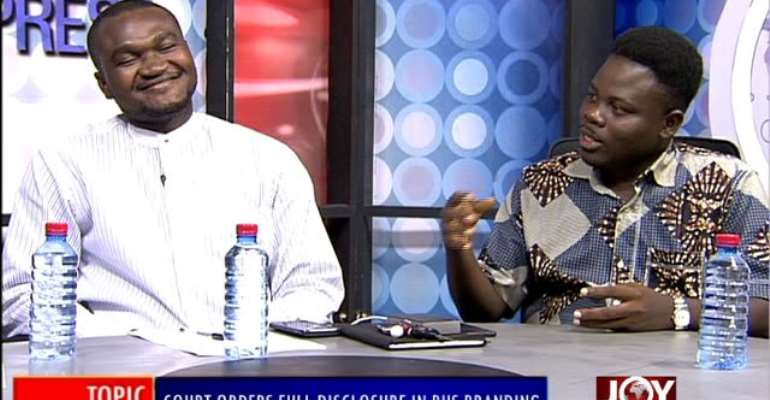 One of seven people who got a high court to grant an application for full disclosure of contract details of a controversial bus branding deal says they were moved by the quest for transparency and accountability in government.

Francis Kennedy Ocloo revealed due to the controversy surrounding the GHÈ»3.6 million deal it is just fair for facts to lay bare, convinced that access to contract documents between government and Smarttys Production would achieve that.

Francis said these when he and his lawyers, Kofi Bentil and Nana Akwasi Awuah, appeared on news analysis programme, PM Express Wednesday.

The landmark case was filled at the high court following revelations that the contract cost of GH¢3.6 million had been bloated by about GH¢1.6 million.

Revelations of a bloated contract sum for the branding of some 166 buses resulted in the resignation of Transport Minister, Dzifa Attivor, and caused the Chief Justice, Julius Debrah to institute a probe into the deal.

Smarttys was subsequently ordered by the Attorney General, Marrieta Brew Appiah-Oppong to pay back the GH¢1.6 million over-billing. Smartty’s has reportedly paid back the money.

The two lawyers who fought the case at the high court say the ruling by Justice Anthony Yeboah will serve as precedence in a country where access to public information is a Herculean task and Right to Information Law is non-existent.

Also, the ruling is expected to lay bare how the contract was awarded and if indeed the government was over-charged by GH¢1.6 million or more.

Francis Ocloo was hopeful that government will heed the court ruling and expedite action to provide the relevant documents. The judge ruled that every document must be provided to the plaintiffs with the exception of a few – national trade secret documents and the likes.

“I want to believe that this government and the people who comprise it are adherents to the rule of law, they respect the decisions of court and they will comply and obey the decisions [as] they themselves are creatures of law,” said Francis.

Lolán Ekow, Kathleen Addy, Kwame Barkers Ansah, and Michael Annor were the other plaintiffs in the landmark case.