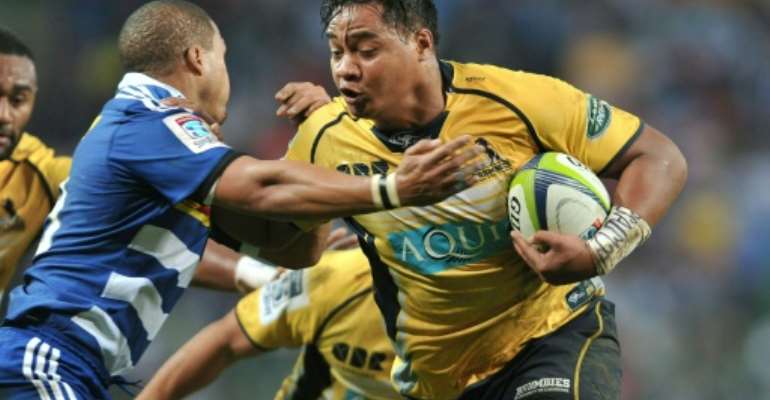 Ita Vaea of the ACT Brumbies (R) is being tackled by Juan de Jongh of the Western Stormers during their Super Rugby match in Cape Town, South Africa. By Luigi Bennett (AFP/File)

A week ago, the Stormers and Lions knew they were battling for South African supremacy as the leading sides in the two Africa conferences.

Now they have the added pressure of impressing the new Boks coach who has laid out his blueprint for reviving South Africa's fortunes and needs the backing of the Super franchises.

Round eight is much less demanding in New Zealand, where leading lights the Waikato Chiefs and Otago Highlanders have the week off, and in Australia where the usual hype around a Brumbies-Waratahs derby has been watered down by the under-performing 'Tahs.

But in South Africa, Coetzee has stepped into his new role preaching an attacking philosophy and with only seven weeks before their first Test against Ireland.

Attacking rugby and Coetzee were rarely used in the same sentence when he guided a defence-based Stormers to the Super Rugby play-offs four times in six seasons, including the 2010 final.

But having seen New Zealand win the last two World Cups with an expansive game, Coetzee accepts that is the way forward and believes he has the backing of the Super coaches to get there.

"It is great to see that all coaches at Super Rugby level have this awareness that we need to brush up on our attack," he said, while adding that did not mean an end to South Africa's trademark physical game.

The Stormers, with five wins from six games, remain strong defensively having leaked only eight tries this year compared to 18 by the Lions who are four from six.

Attacking statistics favour the Lions, who have scored 21 tries to 17 by the Stormers.

The Sharks, beaten at home in the past two weeks by the Canterbury Crusaders and Lions, head to New Zealand to face the Auckland Blues who put on a much improved display last weekend when they went close to upsetting the Chiefs.

Sharks coach Gary Gold sees the match-up as ideal for his side to unleash their attacking credentials.

"When we have possession, it's for us to make the very best of it, to build the phases and put them under pressure," he said.

"One thing about the New Zealand teams is that they don't want to come out and defend, they much prefer being on the attack."

The Northern Bulls, second to the Stormers in the Africa 1 conference, are at home to the Queensland Reds who knocked over defending champions the Highlanders last weekend for their first win of the season.

Argentina's Jaguares, having rested captain Agustin Creevy and a host of other players over the past two weeks, have made nine changes as they return to nearly full strength to start the weekend against the Crusaders in Christchurch on Friday.

The ACT Brumbies, fresh off a bye and a thrashing by the Chiefs the week before that, have been forced to reorganise their back row following the two-match suspension of David Pocock and the retirement of Ita Vaea over a life-threatening blood clot condition.

Jarrad Butler will start the match at openside flanker with Jordan Smiler at number eight.

Kurtley Beale is expected to return for the Waratahs, who have lost their last two home matches at Allianz Stadium. The last time they lost three successive matches at home was in 2007.

In other matches this weekend, the Melbourne Rebels host the Wellington Hurricanes and the Central Cheetahs are at home to the Sunwolves.