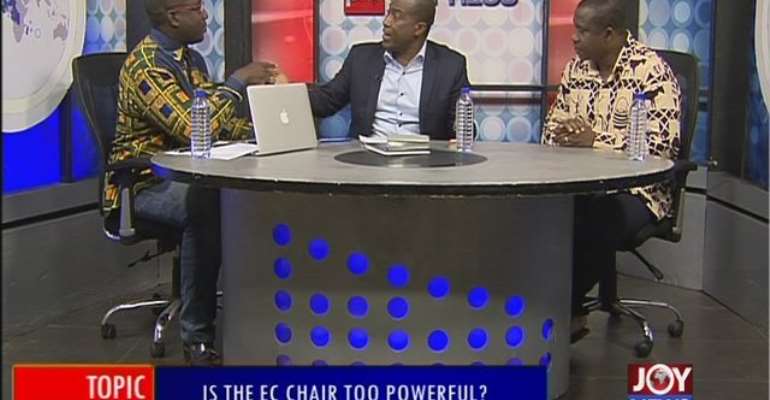 Two lawmakers from the NPP and NDC echoed the views of the Minority and Majority in Parliament on PM Express Monday over a Constitutional Instrument (C.I.) that was passed in March year.

NPP MP for Asuogyaman, Kofi Osei-Ameyaw and MP for North Dayi, George Loh, were in disagreement over relevance of the new instrument (C.I. 91) that was passed by Parliament to regulate registration voters for general elections in November.

The Asuogyaman MP says the coming into force of the new C.I.91 will bring about a new voters’ register that will exist side-by-side with the 2012 register which was compiled using regulations of a previous Constitutional Instrument, C.I. 72.

The CI 91 essentially revokes problematic aspects of the CI 72.

“This new regime (C.I.91) creates another register. In effect by the time we finish, we would have two provisional registers. The saved register under C.I.72 that has been revoked, and the new register that will be brought about by C.I. 91 on 28th of April to May”, explained Osei-Ameyaw.

However, George Loh disagrees.
“Are we running a double registration, I will say no. Let’s not forget election after election we’ve gone through these same process. It is only this time that we are really focusing on it,” he said.

Kofi Osei-Ameyaw
Under the new C.I. 91, a person who applies for registration as a voter shall provide as evidence of identification either;

(a) A passport
(b) A driver’s license
(c) A national identification card or
(d) An existing voter identification card
The National Health Insurance card as a form of identification has been omitted from C.I.91 following the Supreme Court’s ruling in the case of Abu Ramadan & Another v. the Electoral Commission.

When Parliament passed the C.I 91 on March 17, the Majority and Minority in parliament were in disagreement over the incorporation of sections of C.I. 72 into the new Constitutional Instrument. The Minority kicked against it, but the Majority was in favour.

On PM Express on Monday, the two MP re-enacted the debate that ensued in the House after the Constitional Instrument was passed.

Osei-Ameyaw told show host, Nana Ansah Kwao, the new C.I. 91 is susceptible to abuse of due to the incorporation of an aspect of the C.I.72. He said foreign nationals and minors can still infiltrate the new electoral roll that would be compiled using the new C.I. 91.

George Loh, however, said his colleague's fears are unfounded, urging confidence in the regime.

The NPP has always held that the 2012 register is bloated with identities of minors and foreigners.