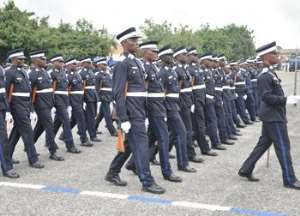 "....Clearly, in 2016, 59 years after Ghana's independence, we would expect the Ghana Police Service to appreciate the "scientific reality" that operationally, 100 crimes in Upper West can never be the same as 100 crimes in the Ashanti Region..., even if those crimes were all of the same type, and they each occurred on the same date and time... Or maybe, IGP Kudalor and the Police Service want to propose that Ghanaians are so stupid and dumb they will never appreciate simple and useful metrics..." (Prof Lungu, 1 Apr 16).

In a comment on Ms. Afua Amoadu's article about citizen's ratings of their own political leaders (from Russia to Bolivia, to Ghana, etc.), Mr. Bond, identified a failing he characterized as "intellectual deficiency syndrome". Again, this essay and the series it represents is about leaders with twisted versions of history and deficit of intellect and critical-thinking skills. It is about intentionally cruel, absent-mindedness about the value of transparency and accountability to the business of the citizens of Ghana that the political and administrative elites claim to represent today.

Much has recently been said, and made, of the error-ridden Ghana @59 Independence Day Anniversary brochure. Again, Dr. Omane Boamah and Mr Mahama owe Ghanaians a better explanation as to who knew what, when, how, why, and how much.

To the point: The errors in the brochure are not for the leader of Kenya to approve, disapprove, or accept, as Mr. Mahama have sought to transfer acceptance and responsibility.

But these essays are not about the single case of error-ridden brochure. No, the essays are about the general lack of attention to detail in communicative media and artifacts by Ghanaian officials at all levels of power and officialdom, all functionaries paid with taxes to provide the best in governance for Ghanaians.

In fact, we spoke briefly about that deficit in our 3-part series, "Prof. Amoako Baah's Teaching is Almost Useless". Even today, after vacating as the "Head" of the Political Science Department at KNUST for reason(s) unknown, that departments website remains as pathetic as the week we completed that series back in May, 2015, when Professor Amoako-Baah was the titular "Head" of that department.

So, more often than not, our laughter at gross "communicative accidents" turns to grief when we remember that the people responsible for those "errors and accidents" are the same people representing Ghana at the highest echelons of international power and business. Increasingly, those singular "errors and accidents" have turned into perpetual walls of shame, a nauseous, fetid pool of non-performance, arrogance, mis-management, and shirking of responsibility. As a result, Ghana losses not only prestige, but also resources, however measured.

Many times, we've wondered whether only a few Ghanaian officials at the highest echelons of political and administrative power actually earned 4-year college degrees, the equivalent of the bachelor's, worthy of the parchment paper they were printed on.

Forget about Master degrees!
Forget about the terminal degrees.
Regularly, we are not sure publications and speeches approved by many Ghanaians officials reflect on the probability that those officials took and actually passed foundation courses in English, History, Biology, Mathematics, Economics, Psychology, Political Science, Business, Communications, Law, Sociology, Philosophy, Geography, Public Administration, and Statistics, etc., beyond the typical American/English grade school curriculum.

So, tell Ghana, how will those officials understand complex proposals and issues when they are sitting next to armies of the best "working stiffs" with Master's and Ph.D. degrees. You know, "working stiffs" from Canada, to UK, to France, to China, to India, to Germany, and so forth. Typically, these professionals come with 10-40 years actual work experience in all manner of modern government agencies and enterprises, from banking, to commerce, to the academy, to the military, to law, to security, oil and gas, to telecommunications, to politics, to development management, etc.).

Fact is, you simply cannot run a country professionally in the 21st Century if officials are weak individually and as groups in all those basic areas of scholarship, business, information, and critical thinking.

None of Mr. Mahama's "Divine Intervention" apply here, however loud and boastful you may pray!

No "Sika Duro" or Antoa deity ever worked in the halls of business and government, except in the minds of the gullible and confused, and the happy pockets to the pimps of religion and fantasy!

But, there is reality.
And reality is typically measurable through observation, data, and analyses!

Even so, in the eyes of many concerned observers, there is precious little evidence that when selfless individuals and other informed "commenters" present "cogent points borne out of their genuine desires" to see Ghana develop, that those same officials responsible for making the most egregious errors and mistakes, do little more than "listen".

Problem is, there is not even much for us to hang our hats on, to suppose that mant top echelon officials actually read the many comments, and even less, that they act to correct the record the next time around.

Forget about expecting them to reply to any suggestion/comment.

Take the case of the Ghana Police Service and their 18 Mar 16 annual "Wassa get-together report" detailing the incidence of crimes in Ghana, a nation of 27 million people disaggregated into 10 administrative "Regions".

Clearly, in 2016, 59 years after Ghana's independence, we would expect the Ghana Police Service to appreciate the "scientific reality" that operationally, 100 crimes in Upper West can never be the same as 100 crimes in the Ashanti Region or any other Region, even if those crimes were all of the same type, and they each occurred on the same date and time.

It does not work that way!
So, when we finished reading the "Wassa" account on several media, our theory of convenience that practically none of the officials from the Ghana Police Service probably took a course in criminal justice, criminology, or basic statistics, (or passed those courses if they took them), was confirmed.

That is how it is done where there are "scientific-thinking heads".

Or maybe, IGP Kudalor and the Police Service want to propose that Ghanaians are so stupid and dumb they will never appreciate simple and useful metrics such as, there were:

Surely, this is not the first time someone has proposed this common "scientific" approach by way of a critique of Ghana Police Service annual "Wassa data" release.

So, what exactly is the problem with the Ghana Police Service?

Or, is it that they "listen", a la Mr. Omane Boamah, but that they just do not care?

When will the Ghana Police Service stop wasting the Peoples' time and resources on foolish, uneducated chatter and reports?

When, we must ask directly, will the Ghana Police Service start arresting this nagging, persistent "intellectual deficiency syndrome"?

Hasn't Ghana grown up since some among the leadership of the Ghana Police Service (IGP Nunoo, for example), took up the traitor banner and deposed Dr. Kwame Nkrumah 59 years ago?

Brought to you courtesy of www.GhanaHero.com©10 Apr 16.