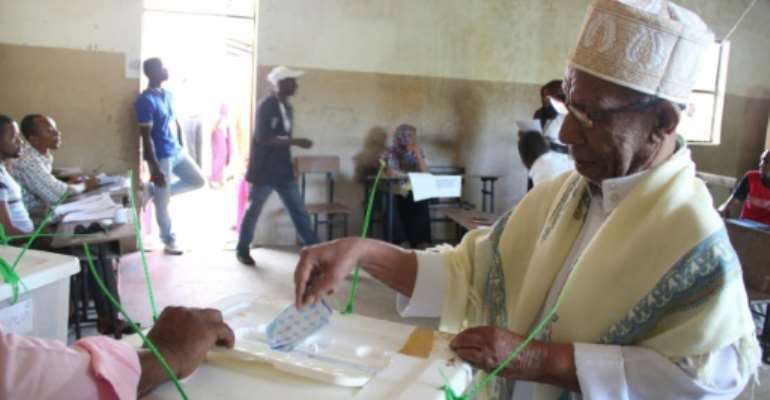 A man casts his ballot in Moroni during the second round of presidential elections in Comoros. By Ibrahim Youssouf (AFP)

The second round of the presidential race in the Indian Ocean archipelago comes after Vice President Mohamed Ali Soilihi -- known as Mamadou -- won the disputed first round in February with 17.88 percent of the vote.

The two other contenders are governor of Grande Comore island Mouigni Baraka, who garnered 15.62 percent in the first round, and 1999 coup leader Colonel Azali Assoumani, who took 15.10 percent.

Nineteen of the 25 candidates who stood in the first round rejected the outcome and demanded a recount, but the Constitutional Court ruled against them, upholding the results.

Second-round voting began just after 7:00 am (0400 GMT) on Sunday and Interior Minister Mohamed Elhad Abbas said "all the conditions for a transparent vote are in place", but conceded that despite security measures "you can feel a definite tension".

The campaign was marked by a barrage of personal attacks and allegations of corruption, particularly between Mamadou and Assoumani -- who is seen as Mamadou's main rival after receiving the endorsement from the opposition Juwa party, which has no candidate in the second round.

Five people were arrested on Sunday for "electoral propaganda" in local elections being held alongside the presidential poll, and incidents involving activists from the different camps were reported on the island of Anjouan.

Baraka told AFP by telephone that he was "worried by what is happening on Anjouan", where the Juwa party is popular.

Juwa split over the Assoumani endorsement, and 15 high-ranking party officials resigned to rally behind Mamadou, who is viewed as the establishment choice.

Assoumani first came to power in 1999 after ousting acting president Tadjidine Ben Said Massounde in a coup. He then won the presidential election three years later, stepping down when his term ended in 2006.

Results in the race to succeed outgoing President Ikililou Dhoinine are expected within three days, if all goes according to plan.

But Salim Soulaimana, head of a Comoros association of civil society groups, warned it was a "high risk vote".

"Voters are in a suspicious frame of mind because of the irregularities in the first round," Soulaimana told AFP.

The first round took place only on Grand Comore island, in accordance with electoral rules that ensure the president is chosen on a rotating basis from the three main islands.

Comoros' system was established in 2001 after more than 20 coups or attempted coups, four of which were successful, in the years following independence from France in 1975.

The three islands that make up the Comoros -- Anjouan, Grand Comore and Moheli -- have a total population of just under 800,000 people, nearly all of whom are Sunni Muslims.

Dhoinine's completion of his five-year term in the impoverished archipelago has been seen as a sign of growing stability in the Comoros in recent years.

Though the islands, situated between Madagascar and Mozambique, suffer dire poverty, they export some vanilla, cloves and ylang-ylang perfume essence.

Comoros is the world's top producer of ylang-ylang, which is extracted from a flower -- a commodity that makes up one-tenth of the archipelago's total export revenues.

The oil is a key ingredient in Chanel Number 5 perfume and is also used in many other fragrances.

Minority MPs stage walk out on approval of deputy ministeria...
49 minutes ago

The Ministry dispatched personnel to ask DCOP Opare-Addo why...
49 minutes ago