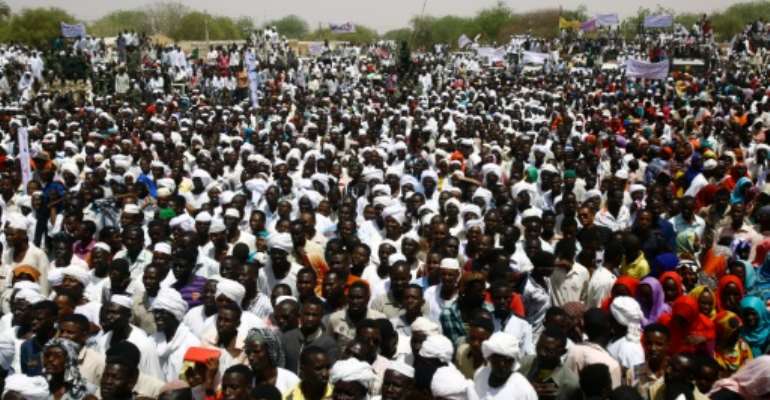 People gather to attend a speech by the Sudanese President during his visit to Eastern Darfur on April 5, 2016, ahead of a referendum on the future of Darfur. By Ashraf Shazly (AFP/File)

Washington (AFP) - The US State Department on Saturday expressed "serious concern" over next week's referendum in Sudan on the future of Darfur, stating that the vote will not be credible under current rules and conditions.

The April 11-13 referendum will determine whether to unify the five states in the Darfur region, a long-standing demand of rebels seeking greater autonomy.

The vote is expected to maintain the five-state system, which Sudanese President Omar al-Bashir's ruling party says is more efficient but which observers say gives Khartoum greater control over Darfur.

"If held under current rules and conditions, a referendum on the status of Darfur cannot be considered a credible expression of the will of the people of Darfur," said US State Department spokesman Mark Toner.

He emphasized Washington's "serious concern" over the referendum, stating that it will "undermine the peace process now under way."

Heavy fighting in Darfur has forced more than 100,000 people to flee their homes, joining a pre-existing population of some 2.5 million people in the region who were already displaced, the United Nations says.

It is unclear how voting will be held in the camps for internally displaced people, where anti-government feeling runs high.

Peace in Sudan will be reached only through a process that addresses the underlying causes of the conflict, "secures a lasting cessation of hostilities, and creates the space for meaningful participation of Darfuri groups and all Sudanese in an inclusive and genuine national dialogue," Toner said.

The Darfur referendum "will contradict these key objectives and the broader goal of peace and stability in Darfur," he added.

Bashir -- wanted by the International Criminal Court on war crimes charges related to Darfur -- insists the situation is stable enough for voting to go ahead.

Sudan has been subject to a US trade embargo since 1997 and the conflict in Darfur has been given as a reason against lifting sanctions.