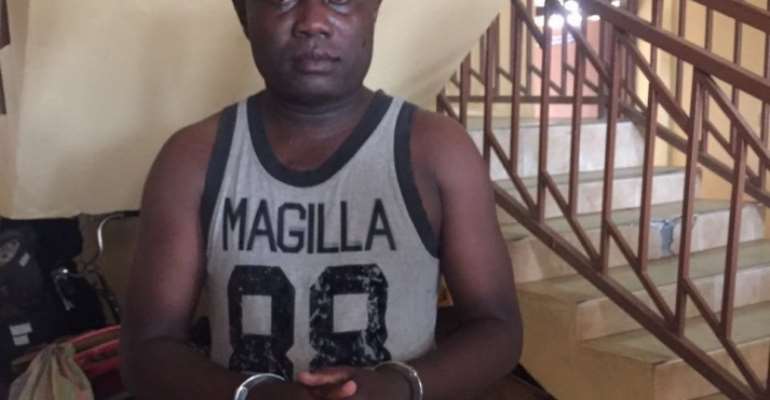 An excavator operator is in the grip of the police for allegedly duping 14 people of $27,400 on the pretext of helping them to travel to the Philippines.

The suspect whose name was given by the police as William Osei, alias Anane, has been on the wanted list of the police since 2014.

His victims are based in the Greater Accra and Eastern regions.

Osei, who is based in the Philippines, was arrested on March 19, 2016 at the Kotoka International Airport (KIA) when he returned to Ghana allegedly to defraud another group of people.

Accomplice on the run
The Director of the Visa and Document Fraud Unit of the Criminal Investigations Department (CID) of the Ghana Police Service, Deputy Superintendent of Police (DSP) Mr Seth Sewornu, said Osei charged the victims $5,000 each as processing fee.

He said a total of $27,400 was paid by the victims into Osei's account as part payment of their processing fees after they had submitted their passports and passport pictures to a woman, identified as Eunice Oppong Afriyie.

Eunice, believed to be Osei's accomplice, is currently on the run.

Mr Sewornu said in 2014, one of the victims (name withheld) met a friend (name withheld) who had arrived in the country from the Philippines who mentioned Osei as the person who had assisted her to travel outside Ghana.

After expressing interest, the accomplice was said to have given Osei's phone contact to the victim who later contacted Osei.

Victims
Osei is said to have told the victim that he processed the visas of potential travellers to the Philippines in a group and, therefore, asked the victim to mobilise more people for the trip.

Mr Sewornu said the victim told the police that she contacted a number of friends and told them about the travel opportunity. Thirteen of the victim's friends were said to have expressed interest in the offer.

Osei then introduced the victim to his accomplice, Eunice, who lived in Kumasi.

Later, the victim met Eunice in Kumasi and she is said to have told the victim that she and her husband owned the house where they met.

However, when calls to Eunice's phone were not going through, the victim visited the house only to realise that Eunice did not own the house as she claimed.

Osei is said to have sent the victims' scanned copies of Australian visas to be printed for verification.

He said though Osei promised to return to Ghana in June 2014, the victims became suspicious when they realised that his mobile phones had been switched off and Eunice had also vacated her house.

They therefore reported the case to the police.
Writer's email: This email address is being protected from spambots. You need JavaScript enabled to view it.