I Have Nothing Against Martey – Mahama 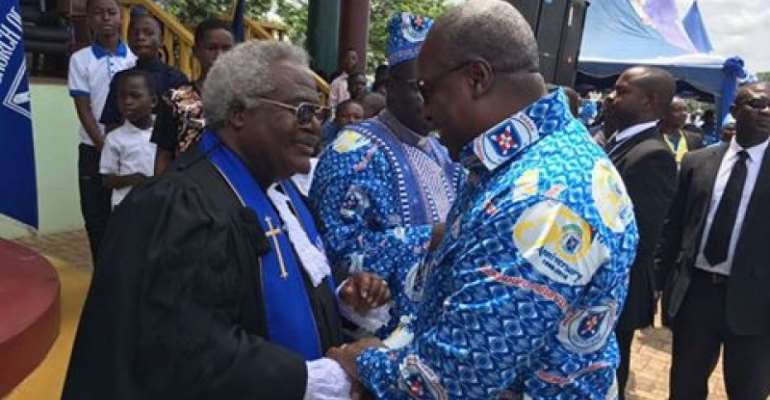 President John Mahama has said he has nothing against one of his harshest critics, Professor Emmanuel Martey.

According to the President, he considers the moderator of the Presbyterian Church as his father and respects his opinion.

Professor Martey has been one of the ardent critics of the Mahama government since it assumed office in 2012.

However, the President was recently seen in a cozy mood with his avowed critic during the 30th anniversary of the Brong Ahafo Presbytery. The picture of the two in a warm embrace came as a surprise to many.

Commenting on the relationship between him and the outspoken clergy, President Mahama told Takoradi-based Twin City Radio that they still remain friends regardless of the backlash he receives from the professor.

“Professor Martey is a respected clergyman and I consider him as my father. I attended the 30th anniversary of the Brong Ahafo Presbytery and of course he was presiding and he was full of humour, he preached a very good sermon and I respect him and he continues to be my friend, I think that we need to have a spirit of acceptance.

"I’m a leader who accepts criticisms and so I have nothing against anybody who criticizes me and I have continued to extend a warm hand of friendship to even those who are my political opponents.