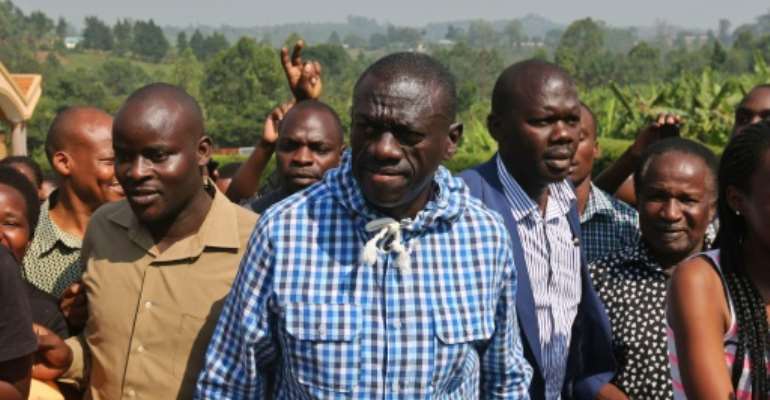 Kizza Besigye (centre), who has rejected President Yoweri Museveni's February 18 election victory, said he was trying to attend a prayer meeting at his Forum for Democratic Change (FDC) party headquarters. By (AFP/File)

Kizza Besigye was arrested as he waved at gathering supporters from the open sunroof of his 4x4 in the capital Kampala, four days after police ended his six-week-long house arrest.

Besigye, who has rejected President Yoweri Museveni's February 18 election victory, said he was trying to attend a prayer meeting at his Forum for Democratic Change (FDC) party headquarters.

Kampala police spokesman Patrick Onyango said police had "no problem" with Besigye attending prayers, but said the politician was arrested, "because he was moving with a procession" and refused to abide by a police order to follow a particular route through the city.

"We advised him, 'For your safety and the safety of everybody, please take this route, don't pass through the city centre'," Onyango said, adding that Besigye's procession contravened a public order law that insists permission for gatherings be sought in advance.

Onyango said Besigye would be charged with unlawful assembly.

Police were withdrawn from outside Besigye's private residence on Friday after 43 days. Besigye said his detention was designed to block him from gathering evidence of fraud in what he called a "scandalous" election.

Museveni, in power since 1986, was declared winner of the February poll with 61 percent of the vote and has rejected claims that his victory was won through cheating and fraud.

Another opposition leader's legal challenge to the election result was dismissed by the Supreme Court the day before Besigye's house arrest was ended.

A long-standing opponent of Museveni, Besigye has been frequently jailed, placed under house arrest, accused of both treason and rape, teargassed, beaten and hospitalised over the years.