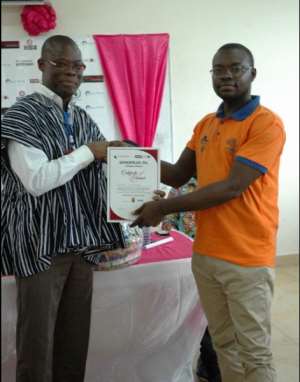 His joy knew no bounds when he first heard his name mentioned as the most influential student media personnel of the Sub-Saharan’s premier communications university.

For him, such a great honor is what he deserves for his achievements as a journalist through dint of hard work and tenacious to purpose.

Joseph Kobla Wemakor, a freelance journalist and a communication student was adjudged the most influential student media personnel for diploma and degrees level of the Ghana Institute of Journalism at the maiden edition of ‘campus clique’ award ceremony held at the school premise last Friday, 1st April, 2016.

The honor was an acknowledgement of his immense contribution towards reporting on developmental issues that affects lives of women and children including helping eradicate poverty in Ghana.

The campus clique event is a brainchild of Sparkplug-Gh aimed at providing a platform to engage, motivate and mentor students to enable them think broadly to become creative and innovative in diverse ways.

The award winner Joseph Kobla Wemakor is an ardent online reporter for many news websites in Ghana and a prolific writer of no mean repute. He is currently a diploma student reading communication studies as a discipline in the Ghana Institute of Journalism.

Joseph is highly passionate about using his God-given talent in solving pertinent problems affecting lives of people in the society and that has helped him carve a niche for himself within the media cycle.

As a prolific writer with remarkable skills in news reporting, Joseph Wemakor has been able to use his reports to positively influence certain donors outside the who came to support the Mother of All Nations Foundation, an NGO to expand its nursery training classrooms from 3 classrooms to 5 classrooms which caused the rise of school population from 80 to 112 as we speak now.

As a result, an International donor, Olaf Schrem came to rescue by providing funds to paint the school building, procure some teaching and learning materials for the school including other assistance resulting into the expansion of the classroom blocks of the school.

The Mother of all Nations Foundation is a community based NGO running charitable nursery school to assist the Madina Zongo community in Ghana to grow by providing a quality nursery training service to salvage lowering education standard at a reduced rate with the aim of giving children in the community a pre-school experience.

Joseph has also supported some Corporate Organizations and Civil Society Organizations in the country including the Light Foundation Ghana (TLF), the Abibiman Foundation, the Purim African Development Youth Development Platform (PAYD), Community and Family Aid Foundation (CAFAF), the Integrated Social Development Centre (ISODEC), Toyota Ghana amongst others to achieve their mandate of eradicating poverty in Ghana.

Apart from his excellent reporting skills, Joseph is also uniquely endowed with dexterous communication talents coupled with a good sense of humor which makes him popular among his peers.

For his prize, Joseph Wemakor was handed a bountiful gift hamper and a beautifully crafted certificate of recognition which he happily received.

Meanwhile Sparkplug-Gh has also awarded Eugene Nyavor as the most influential student on campus including Martin Thompson Ntem as the most entrepreneurial student for Degree and Diploma levels respectively. They both received a hamper and a certificate of honor as a sign of recognition.

It has also presented citation to honor 3 prominent personalities who served as guest of honors for the occasion and whose efforts have greatly influenced the Institute to grow exponentially.

They are Hon. Fiifi Kwetey, Minister for Transport, Naa Ashorkor a renowned media practitioner and Mr. Tim Quashigah, Senior lecturer and Academic Board Representative of GIJ.

Addressing the students at the campus clique event, Minister for Transport, Hon. Fiifi Fiavi Kwetey charged the students to be driven by vision and passion which will ignite the power in them to be the instrument of change and transformation they deserve.

He cautions them to desist from negative thinking which only limits great minds, urging them to be constructive in using their minds to identify problems offering solutions to solve those problems.

“Every problem you see is an opportunity, there are so many problems all over the world around but each one of them remains a massive opportunity. Some of these opportunities will turn you billionaires overnight why? Because you spot an opportunity and you position yourself to solve this problem and in the process you make money” he stressed.

Various speakers who spoke during the event including the guest of honors centered their messages extensively on advising the students to rise up to the challenge and embrace excellence in their chosen fields of study to become good leaders in the future.

President of Sparkplug Ghana, Annabelle Naa Ayorkor in an interview said her foundation is greatly inspired in bringing out the best in every student.

According her, she was personally shock at the attitude of most students in GIJ who yearn for 3rd class degrees in their academic pursuits instead of striving to gain first class degree as a mark of excellence and recognition.

That for her was the ultimate reason for the establishment of the Sparkplug-Gh to address the situation by encouraging students to rise above every limitation to make it high in their pursuit of academic excellence. “I think first class is something everyone should fight for that is what I personally stand for and I would like to urge all students to do the same” she hinted.

When asked what the future holds for Sparkplug Gh, Annabelle said, “We are not limiting ourselves to only GIJ campus alone but with our plans at stake, we are inclined to see it established in most African countries probably Nigeria, South Africa, Tanzania and other countries with the aim of inspiring students to grow up to be great leaders.

Sparkplug-Gh is a foundation with the aim of providing platform to encourage various individuals especially those in the academic sector to unearth their talents. It was established in 2015 by a group of young talented and vibrant students championing the academic and leadership course of the Ghana Institute of Journalism in style.

The campus clique event which was on the theme: education, leadership and service was successfully organized by Sparkplug-Gh and proudly supported by Joy Industries Limited(Main Sponsor), Surfline,Gh-links and Mr. Edward Botchway, Chief Finance Officer (Ecobank)