Groom arrested at altar; Suspected to be armed robber 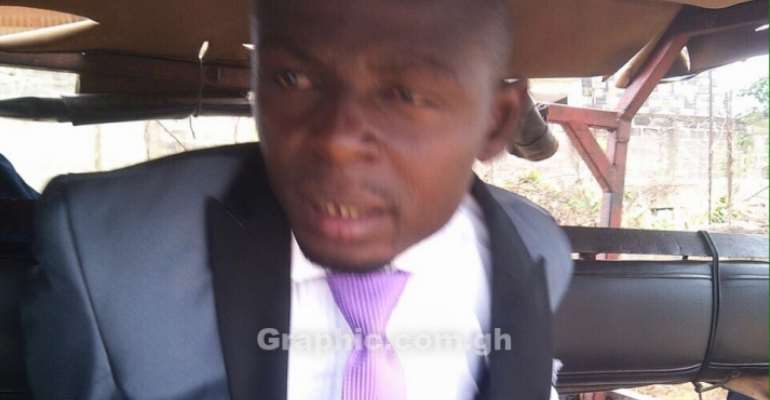 A wedding ceremony at the Aldersgate Methodist Church at Anaji in the Sekondi/Takoradi metropolis ended abruptly last Saturday after policemen arrested the bridegroom on suspicion of robbery.

The bride, identified only as Becky, collapsed out of shock, while her beloved, Aaron Ackah, aka Damoah, in a three-piece black and grey suit and a purple necktie to match, was whisked away by the police.

Becky is said to have regained consciousness later.

The applause was loud after the couple had exchanged vows and the rings were ready to be slipped on their fingers, but before the ritual could be completed, the police went in to turn the wedding upside down.

The church members, who, for a moment thought they were watching one of Ghana's Kumawood movies, fled for their lives after the police had picked the groom.

The groom
According to the Prestea-Huni Valley District Crime Officer, ASP Emmanuel Nwinsori, Ackah and two others allegedly attacked a Chinese worker with machetes and robbed him of GH¢18,000 at Aniamote, a village near Bogoso, on Wednesday, March 30, 2016.

One of the two accomplices has been identified only as Oppong, while the other has been named as Kwame Anu. Both are at large.

Ackah, he said, was easily identified by the victim and was traced to Takoradi, where he was set to marry his girlfriend last Saturday.

According to the police, the groom arrived at the venue for the wedding very early and later cheerfully joined the bride as they mounted the altar for the marriage to be consecrated.

All the vows were exchanged, amid cheers from the congregation, but when Ackah was about to place the ring on the bride's finger, the police entered the church and arrested him.

Marriage cannot hold
Meanwhile, Samuel Noi Mensah, the Presiding Bishop of the Full Gospel Church International, has said the marriage could not hold, since three main ingredients- the pronouncement of the couple as husband and wife, the signing of the marriage certificate and the consumation of the marriage with sex had not happened.

'It can certainly not be marriage once the process was not completed,' he told the Daily Graphic in an interview on Sunday.