The State of the Nation: A President who is out of touch! Dr Kwame Osei 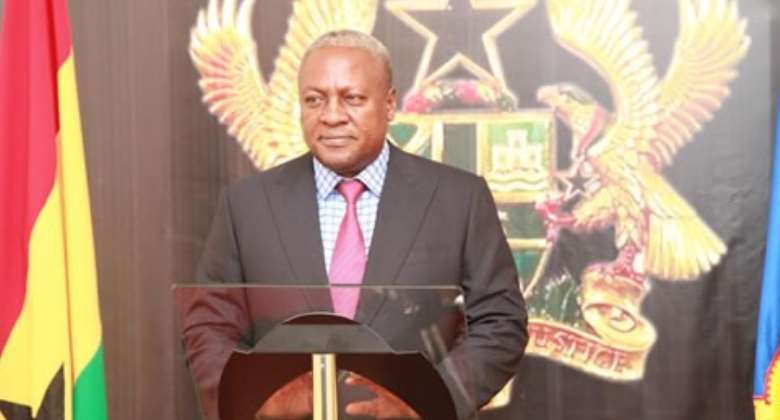 The President’s last state of the Nation address before he seeks re-election this November can be at best be seen as self-aggrandizement and at worst a president who seemed to be out of touch to the stark reality facing the vast majority of Ghanaians.

This article will give without prejudice a critical and analytic picture of the REAL state of the nation looking at five critical areas nationhood namely education, health, employment, the economy and infrastructural development.

Before we deal with each area one-by-one, it must be understood by the readership that the president was not necessarily addressing the people of Ghana, but the International Community who in essence control Ghana and secondly the International business community.

The president was positioning himself to his paymasters the international community as a safe pair of hands and that Ghana was safe under his watch. Again he was covertly saying to the International Business Community that your investments are safe with me.

Let us now proceed to look at the key indices –

The Economy
With respect to the president and his ardent supporters the Ghanaian economy is in a mess. Inflation that was single digits during the short reign of Atta-Mills is now spiraling out of control and now stands at 18.5%.

Interest rates are hovering at about 35% meaning that Ghana has the highest interest rates on the continent, making Ghana a very expensive place to do business and this is why many small to medium sized businesses in Ghana have closed down due to the high cost of borrowing and / or are struggling to develop their businesses.

Next part of the economy and why Ghana’s economy is dead!!! The key sectors of the Ghanaian economy such as Banking, Retail, Mining, Oil and Manufacturing ARE controlled by Whites, Indians, Chinese and Arabs – what these means is that the revenue made by these people goes out of country as capital flight and even tax avoidance.

The fact that indigenous Black Ghanaians DO NOT control these key areas of the economy is very worrying and in essence means that whether the NDC and the political elite accept it or not and whether Ghanaians as a whole believe it or not the reality is that we as Black Ghanaians DO NOT control and own the economy of Ghana and given our leaderships pathetic march to the IMF/ World Bank proves this – and we do what they say such as the freeze on public sector employment, raising taxes and selling/part selling prime assets like ECG.

The readers and Ghanaians in general must ask themselves who controls our gold, our oil, our timber, our diamonds, our banking sector and our retail sector and they will bear witness with me that it is not Black Ghanaians.

Another crippling feature of the Ghanaian economy is the massive debt which is at December 2015 US$25 Billion, add to this the daily interest payments on loans serviced and the this has effect on the value of the cedi which is why the former Head of BOG Mr. Wampah was unable to stop the slide of the cedi, which by the way was the worst performing currency in 2015. If the government does not take a very bold decision to revamp the manufacturing and agricultural sector, instead of empty words, the cedi will remain weak and vulnerable.

Again if we look at the balance of payment deficit which is the difference between what Ghana exports and imports, there is a massive gap that has a great effect on the currency that in turn has an effect on the cost of living in Ghana.

Although there has been some work done by Government to address this issue, more work still needs to be done in this area to ensure that we consume what we produce and produce what we consume that will make the local currency strong.

Education
Article 26 of the Universal Declaration of Human Rights stated that education is a RIGHT!!! In this regard, it is the right of the government to provide adequate education to its citizens.

Failure to do this goes against the very essence of human dignity and personal development as an education broadens the mind and opens up opportunities for personal growth and development. Therefore building schools etc is no mean achievement as it is government’s duty and responsibility to provide this for its citizens.

The stark reality of the education system in Ghana is that it is in a complete mess regardless of what the President says. First and this is what I have heard no media commentator or even those that work within the profession talk about is the curriculum.

The national curriculum as it stands at the moment is too European orientated and is not conducive to national development as it does not address the fundamental political, economical, social cultural and technological needs of the country.

Because of this lack understanding and thinking outside of the circle of the need to change the national curriculum, the quality of students leaving the educational institutions of this country is very substandard with many leaders in the business community complaining about the quality and caliber of students entering the workforce.

So it is all very well and good to construct schools but if the curriculum is not able to challenge an individual’s aspirations and secondly to contribute to the social, cultural, political, economic and technological advancement of the country then even the most grand edifice becomes a white elephant and this lack of understanding of the need to tailor the curriculum to the above needs of the country that every Ghanaian leader after Dr. Kwame Nkrumah including the current incumbent have failed miserably to address.

Unless as a nation our political leadership and policy makers recognize the obvious flaws in the curriculum and take active steps to radically alter and tweak it to our social, economic, cultural, political and technological needs, then Ghana will NEVER be able to make the giant strides in human endeavour that it aspires to.

Another issue to do with education in Ghana is the accessibility – Today in Ghana despite certain interventions such as the school feeding programme that has serious misgivings and the introduction of free school uniforms and sandals, accessibility to education for many in Ghana, especially in the rural communities is a serious problem which nicely brings us to the issue of corruption in the education system in Ghana. The endemic, nasty and wicked corruption in the system of education in Ghana leads to the stagnation in the evolution of the progress that stifles the country’s development.

Issues such as teachers not getting paid their salaries / allowances, through to poor working conditions, retention of good teachers, professional training and development programmes for teachers through to directors of education and the assembly members looting the capitation grants that should be used for schools’ development through to corrupt head teachers who with corrupt officials scheme to charge unsuspecting parents additional fees for example building fees, extra tuition fees.

One massive consequence of our inability to deliver quality education is the atrocious and appalling standard of English as evident in the ‘Independence’ day commemoration programme/brochure.

In short notwithstanding those who can afford to go to top class private schools, education for many in Ghana is in a shambles!!! The above are structural deficiencies that is damaging Ghana’s ability to deliver quality education for all - How the President cannot see these challenges, baffles me!!

Employment
This is a major challenge facing the country that the President failed to devote time to. Literally millions of Ghanaians are jobless hence the disturbing increases in crime, prostitution and other social vices.

As such it was very disappointing that the President of the Republic of Ghana was not able to deliver a comprehensive employment strategy to address this national crisis.

However it is not a great surprise why the President is not able to come up with a comprehensive strategy to tackle the unemployment menace as one of the major implications of getting an IMF/World Bank bailout is a TOTAL freeze on public sector employment for 3 years!!!

Health:
Health is perhaps the most important part of human development as the adage says your health is your wealth, meaning that a healthy nation is a wealthy one.

Given this then the state of health and health care in Ghana is shocking to say the least. Lack of proper medicines (through the wicked greed of some selfish church and mosque going Ghanaians who steal and the sell the medicines allocated for the sick and needy), lack of proper facilities and equipment, shortage of qualified doctors, retention of good quality staff, poor working conditions, poor remuneration, disgruntled and de-motivated staff some of whom have not been paid for more than two years, poor maintenance of equipment and so forth.

In addition to this the NHIS that was implemented to make healthcare accessible and affordable to ALL has either virtually collapsed or is about to collapse due to mis-management and ineptitude on the part of those who have been given the duty to administer it.

Another dimension of healthcare/wellbeing is that Ghanaians are suffering from an array of diseases such as diabetes, hypertension, malaria, sickle cell, fibroid tumors, prostate cancer and mental health that need serious attention paid to.

In view of this it was very disappointing that the President did not mention any research and development initiatives to look into these diseases including herbal medicine to find cures for these diseases that are crippling the nation in terms of productive hours lost and putting further strain on an already overburdened and poorly resourced Ghana Health Service.

Whilst the president was inadvertedly boasting about the schools, roads, etc that have been done, there were some notable absences from his speech regarding infrastructural development. Firstly despite the roads that have been built, there is still a shortfall in road development in the country – for example it is fine doing the main roads, but what about the in between these main roads?? A fine example is the N1 Highway from Tetteh Quarshie to Mallam Junction – this is the stretch of fine road that has been completed – however the in-between feeder roads in the surrounding area like Gbawe, Santa Maria, La Paz, Sakaman, Kwashieman etc, are very dusty and are in dire need of re-surfacing and re-construction

Again as far as infrastructural deficit is concerned in our hospitals there is a lack of cutting edge technology hence the political elite go outside of Ghana preferably to Europe to treat themselves as they, the political elite have no confidence whatsoever in the resource starved Ghana Health Service is a grave cause for concern.

Again there is a massive housing deficit in the country of more than 2 million units which means that many Ghanaians can never get on the housing ladder as they are few affordable housing units being built that most Ghanaians can afford. Given this there was nothing in the president’s address thought sought to look at the long term strategy to address this pressing issue.

Conclusion: It was a very disappointing address by a President who seems out of touch with reality and painting a picture that is not necessarily there – it is like the glass half empty and the stark reality is that Ghana is in an economic meltdown that is already have severe consequences for the country that still the ruling government cannot or refuse to see

Independence is only the prelude to a new and more involved struggle for the right to conduct our own economic and social affairs; to construct our society according to our aspirations, unhampered by crushing and humiliating neo-colonialist control and interference.