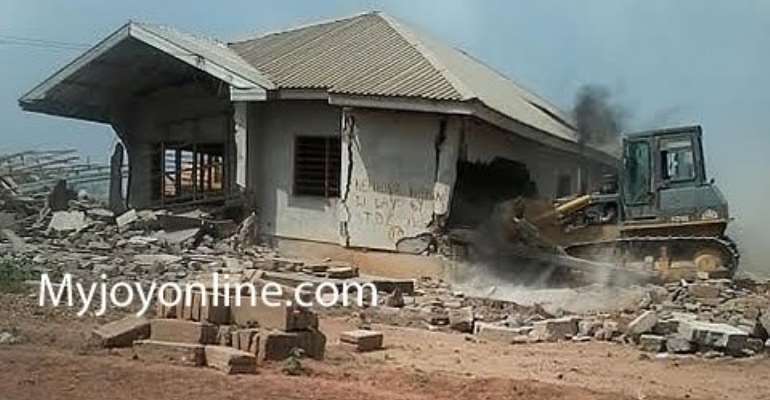 Tension is mounting between some aggrieved residents of Adjei Kojo, a suburb of Tema in the Greater Accra Region and the Tema Development Corporation (TDC) over the reallocation of lands.

The residents whose homes were demolished in 2014 are accusing TDC of planning to keep portions of the land .

The Corporation demolished more than 150 homes at Adjei Kojo, accusing the residents of encroaching on its lands.

A building reduced to debris
Several petitions , were written to draw President John Mahama's attention to what the residents believe is unjust demolition exercise.

Although a reallocation has been proposed at TDC, a seven-member committee set up to oversee the reallocation says TDC would keep portions of the land.

Exclusive details of a proposal from the committee to the residents available to Joy News indicate that some of the affected residents will each get half plot of land, regardless of what size of land they may have initially owned.

The decision to slash the sizes of lands is due to a number of reasons. According to TDC, the list of affected landlords submitted to it far exceeds the number of houses it demolished, hence the decision to squeeze everyone into the space.

It also says portions of the land have already been allocated for the construction of estate houses, schools, police station and other infrastructure as part of the Tema Community 24 project, a reason why those portions cannot be given back to the victims.

The committee is now insisting all affected victims will get lands only within the neighbouring Sraha area. The committee says the other lands have been allocated for other projects.

The committee insists the allocation “is a humanitarian gesture by TDC, and the residents must accept it.” However, the victims have expressed displeasure, saying giving portions of the land to TDC is a violation of the executive order.

The committee says only those who were living in completed houses as at the time of demolishing will benefit from the allocation. Owners of uncompleted houses and bare lands will be left out because the TDC says it does not consider them victims.

The Member of Parliament for Tema West, Irene Naa Torshie, met some of the affected landlords to brief them on the proposals.

But the victims have vowed not to accept the offer.

“We are not going to accept it. We are being frustrated. The President has given the authority that our land should be returned to us,” spokesperson for landlords at Adjei Kojo Humphrey Daniel Banini told Joy News’ Joseph Opoku Gakpo.