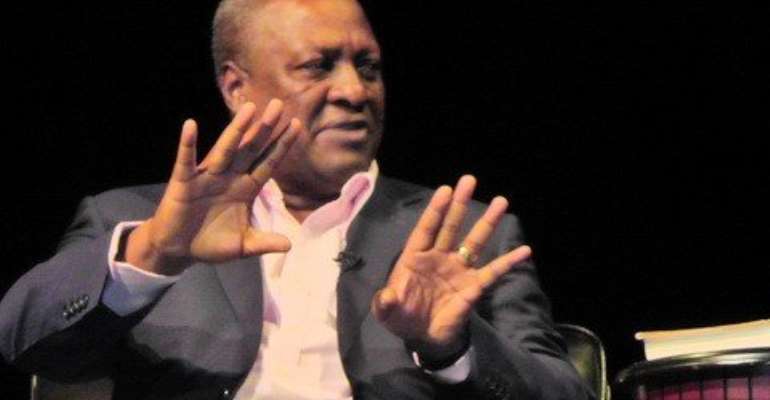 For the second time, the Economic Intelligence Unit (EIU) has predicted victory for the opposition New Patriotic Party when Ghanaians go to the polls in November 2016.

The report says a stagnant economy is expected to feed into the NPP narrative that the governing party is not fit for re-election.

“There is little time for Mr Mahama and the NDC to turn the economy around before the November 2016 Presidential and Legislative elections. The Economist Intelligence Unit therefore expects Nana Akufo-Addo and the NPP to be victorious”

The EIU report expects the results to be close and warned that the “outcome is not a foregone conclusion”. It revealed that the NPP needs to maintain internal unity and reach out beyond its strongholds.

The report points out that Greater Accra is likely to determine who wins 2016.

But with the NPP 2008 defeat blamed on complacency, the Deputy General Secretary Nana Obiri Boahen in a reaction to the report told Joy FM’ s Top Story, the party is taking nothing for granted.

“We are not going to bank our hope on any prediction from an astrologer or soothsayer”, he said.

Although he acknowledged that the general economic frustration of Ghanaians is “a notorious fact”, Nana Obiri Boahen said the party will campaign ‘village to village’ ‘cottage to cottage”.

While the report cast dark fortunes for the NDC, its deputy General Secretary Koku Anyhidoho welcomed the report.

He referred to portions of the report which says Ghana is on the verge of exponential economic growth between 2017 to 2019.

According to Koku Anyhidoho, this prediction destroys the NPP narrative that the Mahama-led government has destroyed the economy.

He said the report endorses the NDC view that the President has invested massively in infrastructural development necessary for an economic take-off.

Full EIU Report
Outlook for 2016-20 Political stability Ghana will continue to enjoy an enviable level of political stability in the coming five years, backed by its robust democracy. This does not mean, however, that it will be without significant tensions at some points. Public resentment at slow economic growth by historical standards, electricity shortages, high inflation and currency depreciation is likely to result in public protests, as have happened sporadically over the past year.

The president, John Mahama, and the National Democratic Congress (NDC) government will bear the brunt of the blame for the situation, with the opposition New Patriotic Party (NPP) attempting to act as a focus for disenchanted Ghanaians to rally around, knowing that attacking the government's economic record represents its best chance of taking power at the elections set for November 2016.

In extreme cases public anger can snowball into a popular uprising. However, such a level of instability is unlikely in Ghana, where democracy is firmly established; the entrenchment of the democratic process is the most powerful factor in preventing popular unrest expanding to the point that it threatens the political structure as a whole. Nonetheless, although Ghana's democracy will shield it from a breakdown in political stability, election-related tensions, particularly if close results are disputed by the losing side, are likely to result in outbreaks of unrest.

The NPP goes into the election period unhappy that its demands for a new electoral roll have been rejected by the Electoral Commission in favour of a cleaning¬up of the current register— which the NPP claim is biased towards the NDC. A disputed election would be decided by the courts, as happened in 2012. At that time all sides accepted the verdict.

However, in 2015 the judiciary was hit by major corruption allegations. A lack of trust in the judiciary would make it more likely that any 2016 election case verdict is not accepted, increasing the risk of instability. However, if, as seems likely at present, there is a transparent investigation into the corruption allegations that punishes those guilty of wrongdoing, then trust should be improved enough for any 2016 election challenges to be handled without triggering instability.

After a fraught 2016 election period, the threat of instability will recede during 2017 19 as better economic performance helps to ease frustrations, before another spike in tensions ahead of the 2020 elections. Outside of politically driven instability another important risk is of terrorist attack. Attacks in early 2016 in neighbouring Burkina Faso by Islamist extremists brought the threat closer to home. Although the low incidence of sectarian tensions suggests that the country—even if not without disenchanted youngsters—is not an ideal breeding ground for radicalised aggressors, the porosity of its borders remains a cause for concern.

Ghana is not likely to be a central target for terrorists, but its close ties with the West and significant ex-patriate population in Accra may draw the attention of extremists. Ghana 3 Country Report February 2016 www.eiu.com © Economist Intelligence Unit Limited 2016 Election watch There is little time for Mr Mahama and the NDC to turn the economy around before the November 2016 presidential and legislative elections. The Economist Intelligence Unit therefore expects Nana Akufo-Addo and the NPP to be victorious.

The outcome is by no means a foregone conclusion, however, with the results likely to be close. The NPP will need to work hard to attract votes from outside its heartlands in central Ghana while maintaining internal unity. Meanwhile, the NDC will continue to enjoy strong support in the east and north of the country, owing to historical and tribal allegiances. Greater Accra, a historical swing state, will be a key battleground, and so tensions in this economic hub could disrupt business operations. The following national elections will then be due in 2020.

Whichever party wins in 2016 is expected to preside over an improving economic situation and this will bolster their support in 2020, making re-election the most likely outcome. However, Mr Mahama would be constitutionally barred from standing again if victorious in 2016, so the NDC could face a damaging internal battle to succeed him, which may play into the hands of the NPP. If Mr AkufoAddo is victorious in 2016, he would be eligible to stand again in 2020, but would be 76 years old by then and so could face challenges from inside his party.