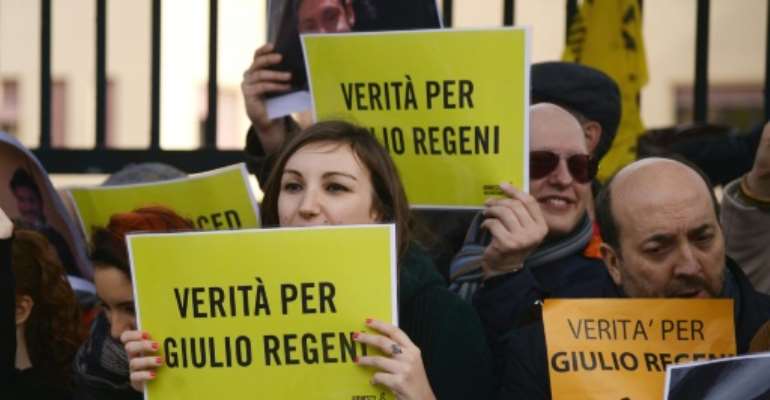 Cairo (AFP) - Egypt's state prosecutor ordered Wednesday the formation of an investigating team to probe the brutal murder of Italian student Giulio Regeni, after Rome cast doubt on Cairo's explanation of his death.

Regeni, 28, disappeared in central Cairo on January 25, and his mutilated body was found nine days later on the outskirts of the capital.

Last week the Egyptian police said they had identified a criminal gang linked to his murder, after killing four members and finding the PhD student's passport in the apartment of a sister of one of the slain suspects.

Four people have been detained in relation to Regeni's murder, including the wife and a sister of the alleged leader of the gang.

The other two are the brother and brother-in-law of the gang leader, who was killed in a shoot-out with police along with three other criminals.

Rome has dismissed Cairo's explanations that the gang members, who allegedly posed as police to extort foreigners and Egyptians, were behind Regeni's death.

On Wednesday, Egypt's general prosecutor ordered a team to be set up to probe the student's murder.

"Given that the clues in the case of Giulio Regeni's killing were found in many different areas ... the general prosecutor ordered the formation of an investigative team from his office to continue the investigation," a statement from the prosecutor's office said.

Italy's Interior Minister Angelino Alfano said on Sunday that Egypt agreed to extend the investigation after pressure from Rome.

Italian media and Western diplomatic sources in Cairo have voiced suspicions that Egyptian security services were behind the murder.

Regeni had been researching labour movements in Egypt, a sensitive topic, and had written articles critical of the government under a pen name.

His death has threatened to hit Egypt's already struggling tourism sector, which has seen falling visitor numbers since the ouster of longtime leader Hosni Mubarak in 2011.

Tourism, a cornerstone of the economy, was dealt a body blow after the October 31 bombing of a Russian airliner, claimed by the Islamic State group, that killed all 224 people on board.