University of Ghana confers honorary degrees on Kofi Annan, 13 others 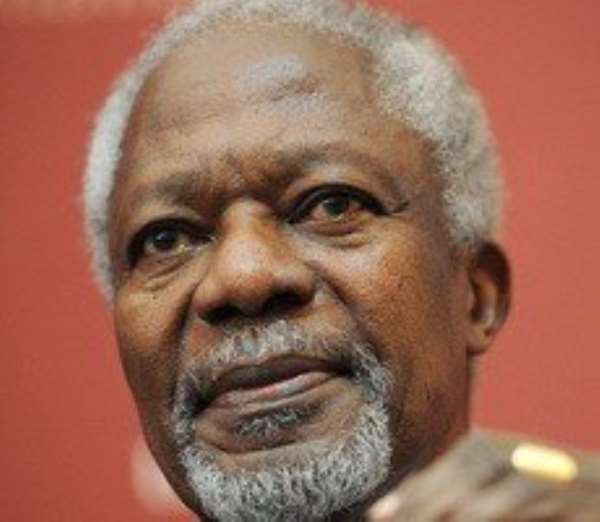 The University of Ghana (UG) has conferred honorary degrees on 14 individuals in recognition of their achievements and contributions to nation building and the University.

The ceremony was held on the final day of the 2016 Aggrey-Fraser-Guggisberg Memorial Lectures, which were delivered by Professor Ian Shapiro, a distinguished Professor of Political Science and Adjunct Professor of Law at the Yale University, on the Role of Businesses in South Africa’s Transition.

Prof Ernest Aryeetey, the Vice Chancellor of the UG, said the award of honorary degrees (Honoris Causa) provided opportunities for universities to show their interest in the happenings outside their campuses; to demonstrate that they were fully in tune with happenings in policy making, business and civil society.

They are also to demonstrate that their work as academics was very much influenced by men and women in the public space.

“By having these ceremonies and inviting some of these men and women who have acquitted themselves extremely well in society, the University says: ‘We see what you do, we appreciate what you do and what you do influences our work and for that we bring you closer and award you,” he explained.

“It is the University’s way of bringing the gown to town”.

Addressing recent public concerns over the award of honorary degrees by some institutions, from which individuals allegedly lobbied or bought their degrees from, Prof Aryeetey, stated:”The University of Ghana’s honorary degrees are only given to deserving people who go through a rigorous nomination and selection process.

“At the University, we believe that for all those we honour, we should be able to explain why those individuals were honoured. I can boldly say today that we are convinced that the 14 men and women we are honouring are very deserving of the awards.”

Prof Aryeetey stated that the recipients of the honorary awards were not expected to change anything about themselves or to address themselves as doctors (Drs).

The awardees include Mr Kofi Annan, the Chancellor of the University, who is a former Secretary-General of the United Nations.

The Distinguished Scholarship Award went to Professor Christopher Udry, a professor of Economics at the Yale University in the United States of America for his support of Research at the UG, among other achievements.

The honour for the Contribution to Education awards went to Mr George Francis Daniel Jnr, a former Registrar of the UG, Prof. Jerome Siau Djangmah, a retired scientist and educationist, and Professor Peter French, a former University President, who has had notable involvement in education reform in Africa.

Under the category of Alumni, which is the pride of the University, the awardee was Mr Kweku Mensa-Bonsu, an advertising professional and a former President of the Alumni Council, who also provided pro bono services to the School of Communication Studies for many years.

Mr Robert Joseph Mettle-Nunoo, received the honour of a Distinguished Public Servant and strong advocate of the University, while Mrs Bridget Katsriku, the Chairperson of the Public Services Commission and Prof Kwabena Frimpong-Boateng, a renowned heart surgeon and a former Chief Executive Officer of the Korle-bu Teaching Hospital were awarded for their contribution to Public Service.

Mr Ramchand Udharam Mohinani, the founder of the Mohinani Group and Mrs Justina Baidoo, the founder of the Adom Group of companies (Adom Mmroso) were honoured for their contribution to industry, while Prof Samuel Ofosu-Amaah, the Foundation Director of the School of Public Health and the Reverend Prof Andrews Seth Ayettey, the Foundation Provost of the College of Health Sciences, were the recipients of Institution Builders Award.

The distinguished International Leadership and Statesmanship award went to Prof Akua Kuenyehia, a former Dean of the Faculty of Law and an alumna of the UG, who rose to become the Vice President of the International Criminal Court.

Prof Shapiro was also awarded for his achievements and his role in the 2016 Aggrey-Fraser-Guggisberg Memorial lectures.

Prof Jerome S. Djangmah thanked the University, on behalf of his colleagues, and pledged their continued support for the University wherever they found themselves.

Honoris Causa is a Latin term that means ‘for the sake of honour’. It is awarded as a mark of esteem, hence, recipients are exempted from matriculation, study and examination.