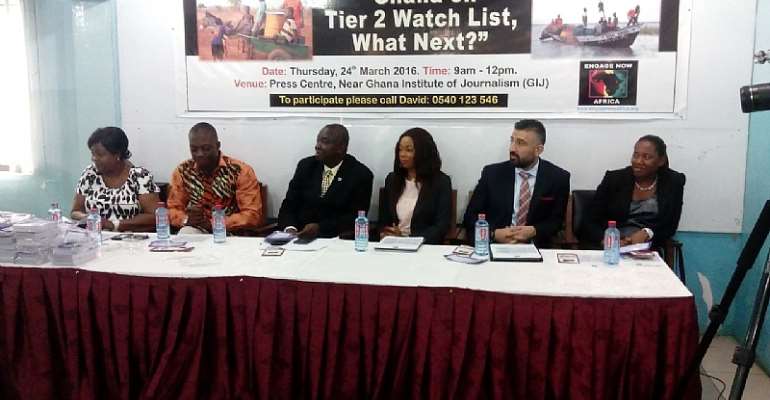 Engage now Africa, an international NGO committed in ending poverty in Africa is calling on government to as a matter of urgency show strong political commitment by allocating adequate resources in combating human trafficking in Ghana.

David Kofi Awusi, Assistant Director of Engage Now Africa made the call during a press briefing and a media launch of a project dubbed “End Modern Slavery” work in Ghana on Thursday, 24th April, 2016 at the Accra International Press Centre.

The launch of “End modern slavery” work in Ghana project was organized by Engage Now Africa on the theme: “Ghana on Tier 2 Watch list, What Next?”

According to David Kofi Awusi, the launch of “End Modern Slavery” works in Ghana seeks bring on board all stakeholders with the aim of adopting a holistic approach towards ending human trafficking activities that put the lives of children and unsuspecting people at risk.

Human trafficking in Ghana has been rampant growing at an alarming rate with over 190,000 people being victims of the barbaric act as we speak today. What is even so shocking is that over 49,000 victims mostly children are already engaged in the cruel act on the Volta Lake alone. Out of this number, over 21,000 of them are forced into hazardous labour like diving into a deepest depth of a river to remove a trapped net including other dangerous works that put the lives of these children at risk.

Currently Ghana is ranked on tier 2 Watch list according to the annual trafficking in persons report by US Department of State. This ranking means that the Government of Ghana has failed to comply with the “minimum standard for elimination of trafficking” found in section 108 of the Trafficking Victims Protection Acts (TVPA).

Country Director for Engage now Africa, Cecilia Amankwah in a statement noted Ghana stands the risk to be sanctioned if care is not taken and it moves in tier 3. “The danger is that if Ghana moves into tier 3, it risks receiving international aid and all donor supports towards national development in addition to majority of human capital loss” she hinted. “We will then fail majority of Ghanaians due to our inaction” she added.

According to Cecilia Amankwah, the move to stop Ghana from moving into Tier 3 has necessitated Engage Now Africa to rise up and strongly appeal to Gov’t to urgently move into action through its Ministries with strong political commitment by allotting adequate resources to holistically combat human trafficking in Ghana.

Engage Now Africa has outlined a ‘5 prong theory’ to deal with the issues under the project launched. Some of these measures include organizing sensitization and awareness creation programmes, engaging law enforcement agencies, working with Non-governmental Organizations, traditional leaders and local authorities, victims of human traffic, Government Agencies amongst others.

Engage Now Africa is an International Non-governmental Organization (NGO) with the mission “to engage and strengthen individuals, families, and communities to end poverty by instilling hope and teaching principles of sustainability in education, micro-credit, clean water, medical services, orphan support and eradication of modern slavery”

Ghana must not be caught pants down in future, let's find av...
37 minutes ago

Sputnik V saga: ‘Why should I be a subject of ridicule for b...
44 minutes ago