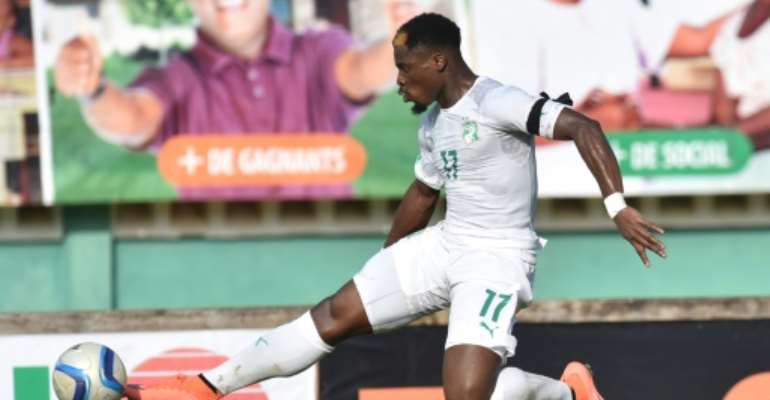 Ivory Coast's defender Serge Aurier controls the ball at the Felix Houphouet-Boigny stadium in Abidjan on March 25, 2016, during the 2017 Africa Cup Nations football match between Ivory Coast and Sudan. By Issouf Sanogo (AFP)

Johannesburg (AFP) - Nigeria ignored a football fundamental -- always play to the whistle -- and it cost them dearly in a 1-1 Africa Cup of Nations qualifying draw with Egypt Friday.

The Super Eagles deserved to be more than one goal ahead at an overcrowded Ahmadu Bello Stadium in northern city Kaduna as the high-profile Group G clash drifted into stoppage time.

Then, a pass from substitute Ramadan Sobhy caught the defence napping and as they stood appealing for offside, Mohamed Salah equalised.

Oghenekaro Etebo, a star when Nigeria won the Africa U-23 Cup of Nations three months ago, had pounced on a rebound off the woodwork to break the stalemate on the hour.

Victor Moses thought he had scored a second six minutes from time after rounding goalkeeper Ahmed Al Shenawy and pushing the ball toward an unguarded goal.

But Hamada Tolba darted back to make a dramatic clearance under pressure just before the ball crossed the goal-line.

Egypt have seven points, Nigeria five, Tanzania four and Chad none in the 'group of death'.

The teams clash again Tuesday in Mediterranean city Alexandria and a win for the Pharaohs would all but seal a slot at the 2017 tournament in Gabon.

Only the 13 group winners are guaranteed places at the biennial African football showpiece while the best two runners-up also qualify.

Defending champions Ivory Coast went to the top of Group I with a laboured 1-0 win over second-placed Sudan in Abidjan via an opening-half goal from Gervinho.

The Ivorians, who lifted the trophy a second time last year after a decade of underachievement, missed injured captain Yaya Toure at Stade Felix Houphouet-Boigny.

Ivory Coast have four points, Sudan three and Sierra Leone one in the only three-team mini-league.

Swaziland, one of 16 African countries never to qualify for the Cup of Nations, stayed top of Group L on goals scored despite being held 1-1 at home by second-place Zimbabwe.

The hosts made a dream start as Felix Badenhorst nodded home a cross just 90 seconds after the kick-off at Somhlolo Stadium in Lobamba.

Zimbabwe recovered to dominate the first half, but their equaliser a minute before half-time came gift-wrapped from the Swazis with Njabulo Ndlovu conceding an own goal.

Guinea and Malawi failed to take advantage of the Swaziland stalemate by drawing 0-0 in Conakry, which was hosting the national team for the first time since a 2014 Ebola virus-induced ban was lifted.

Swaziland and Zimbabwe have five points each and Malawi and top seeds Guinea two apiece.

Mauritania joined Cameroon at the top of Group M after snatching a 2-1 victory over Gambia in Nouakchott through a stoppage-time goal from 'Bessam'.

He put the hosts ahead at the Stade Olympique during the opening half and Mustapha Carayol, from English second-tier club Leeds United, levelled on the hour.

Cameroon and Mauritania have six points each and Gambia and South Africa one each with the Bafana Bafana away to the Indomitable Lions Saturday.

Youssef Msakni nodded in just after half-time to give Tunisia a 1-0 win over Togo in Monastir and top place in Group A on goal difference.

Tunisia, Togo and Liberia all have six points while Djibouti have lost their three matches.

The biggest win came in the final match with winger Sofiane Feghouli and Islam Slimani bagging braces as Algeria crushed Ethiopia 7-1 in Blida despite Yacine Brahimi failing to convert a penalty.

Algeria have a maximum nine points in Group J, Ethiopia four, Seychelles one and Lesotho none.