US urges freedom of expression in Congo after assault on AFP, Le Monde journalists 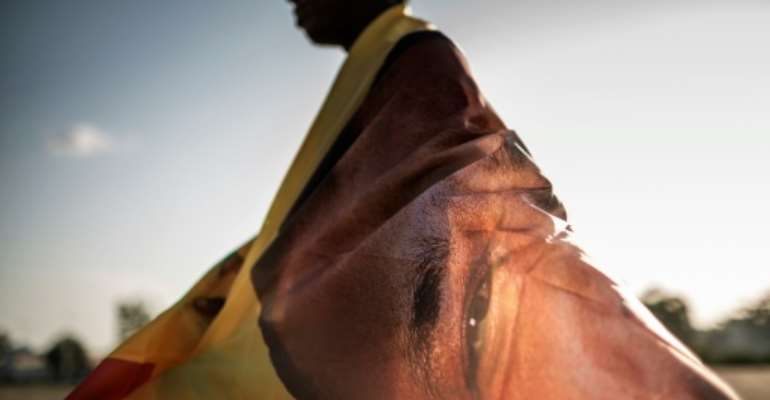 A supporter of elected President Denis Sassou Nguesso is wrapped in a flag at a sport field ahead of a rally organised to celebrate his re-election in Brazzaville on March 24, 2016. By Marco Longari (AFP)

Washington (AFP) - The US State Department urged Congo Thursday to ensure respect for freedom of expression, a day after AFP and Le Monde journalists were assaulted while covering the presidential election in Brazzaville.

In a statement specifically naming the two media outlets, State Department spokesman Mark Toner said the United States was calling "upon the government of the Republic of Congo to ensure respect for freedom of expression, assembly, and movement."

Three journalists who were accredited to cover the Sunday election were assaulted by four individuals in civilian clothes as the reporters left the home of opposition candidate General Jean-Marie Michel Mokoko.

The attackers, who harassed the reporters and struck one AFP journalist in the face, identified themselves as police officers but refused to show their professional identification.

France's foreign ministry has demanded an explanation by Congo.

On Thursday, Congo strongman Denis Sassou Nguesso was declared the winner of the vote and elected for a third term, extending his 32 years in power in a process the opposition says was marked by "massive fraud."

The State Department said it took "note of the presidential election results announced by the Minister of Interior in the Republic of Congo."

"Pending the proclamation of the definitive results by the Constitutional Court, we appeal to all candidates and their supporters to remain calm," Toner said.

"The United States remains concerned about the transparency and credibility of the electoral process, including reports of irregularities, and the prolonged communications blackout."

Sassou Nguesso changed the constitution in November last year, removing a two-term limit on presidential mandates, and paving the way for his third election victory.

The United States has repeatedly called on African leaders not to amend their constitutions so that they might serve for more than two terms.

Washington has previously criticized constitutional changes in Burundi and Rwanda.