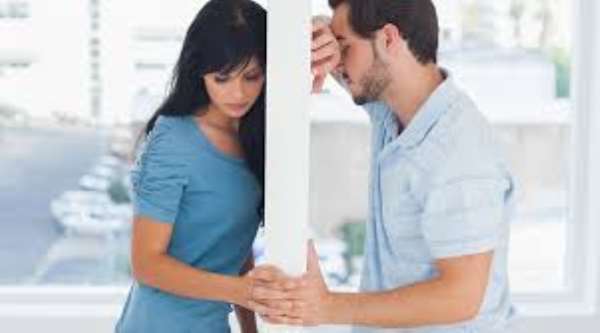 Marriage as the Akans in Ghana put it is a “long journey” with its ups and downs. Marriage has never been a union without occasional frictions and quarrelling and sometimes these quarrels and tensions take place in front of children. Marriage until recently was defined as a union between a man and a woman in which they both have access to each other sexually, share companionship and have children together. Some countries have however redefined the scope of marriage, but that is beyond the scope of this paper and thus focus will be on the original definition without necessarily ignoring the change in laws in some countries.

Tensions among couples are real and these tensions sometimes escalate and may even end up in divorce. According to the American Psychological Association, although 90% of people marry by age 50, 40 to 50 percent of those who get married get divorced in the USA and the divorce rates for those who re-marry after divorce is even higher. Most of these divorce cases are thought to be as result of couples having differences over a period of time and if those differences are not solved, the couple end up splitting up.

Children are thought to be fragile and sometimes cannot grasp the full implications or reasons behind things that happen around them. Thus couples fighting and/or quarrelling in the presence of their children will naturally have effects on the children. Even when the children are old enough to understand issues, seeing their parents at loggerheads may cause some uneasiness as they may be forced to pick a side which is sometimes awkward.

When inter-parental conflict is more frequent, intense, and longer-lasting, however, studies show that children are at increased risk for emotional and behavioral difficulties (Cummings and Davies 1994). Cummings and Davis further posit that, Children from homes characterized by high conflict appear to be vulnerable to externalizing problems such as verbal and physical aggression, noncompliance, and delinquency, as well as internalizing problems such as depression and anxiety.

Thus the sight of parents in conflict conjures images of disunity between parents in the minds of their children and leaves them with a totally different notion of the relationship that exists between their parents. Children usually grow up with the concept of a united home and parents who love each other and once tension arises in that set up the child becomes disoriented especially when the argument or source of the tension has something to do with the child(ren). The child/ children may end up blaming themselves which can thus affect them psychologically.

In developing countries like Ghana, tension between parents has a totally different dimension as the possibility of children witnessing parental conflict is more pronounced. In developed countries, children usually have their own rooms to themselves, but in a place like Ghana where poverty is high, children sometimes share a single room with their parents with a curtain separating the parents' bed from that of the children. This thus exposes them to whatever the parents say to each other including quarrels and insults targeted at each other.

The Department of Justice in Canada, in a study titled High-conflict Separation and Divorce: Options for Consideration, quotes Raschke and Raschke (1979) and argues that, “After comparing 289 grade school children…, while children are not adversely affected by family structure, such as living in a single parent family, family conflict can be detrimental to their self-concept”. Thus children living in broken homes may not necessarily be adversely affected, but the process the leads to broken homes are what causes the stir and adversely affects children. Once these tensions start building the children start conjuring up images of how their lives will be like if their parents are to split as a result of the tensions and they are left to start thinking which parent will gain custody of them. This puts children under intense pressure and can lead to them being emotionally distant among their peers.

Smith and Jenkins, (1991), also argue that, “Parental conflict has been identified as a key mediating variable in producing negative outcomes in children, including those in intact families” Whilst Mooney et al citing a number of sources also posits that, “Research comparing intact families experiencing high levels of conflict with lone parent families, found that children fared less well in intact families … demonstrating that family functioning has a greater impact than family structure … or divorce … in contributing to child outcomes”. Thus in effect, whilst most of us may assume that children who live in broken homes are adversely affected by such a structure or family system, the research is rather pointing to the process that leads to the separation as being the major cause of distress for children in any family structure. Thus if the parents separate and live peacefully amongst themselves or relate with each other in a cordial manner, the children are less likely to be affected if compared to those who live together but are at each other's throat daily.

There are others however, who have placed tensions between parents into categories, 'destructive and constructive'. Such people believe that, the more destructive the conflict behavior is, the more negative its effects on the child's condition and behavior (Barthassat, Joëlle 2014). Joëlle citing Grych & Fincham, 1990 further argues that, the child perceives a parental conflict as a stressor. Thence, based on this perception, a primary and subsequently secondary processing stage are generated… The children's affects are influenced by their observation of the parental conflicts, by their attributional styles as well as by their behavior, and these in turn influence the cognitive elaboration process and the child's behavior”.

In discussing Chronic Parental Conflict: How it can be Harmful for Children, Eugster, Kathy (2007) suggests that, some of the effects of tensions between couples include, children's mental Health being negatively impacted as a result of the result. Also, children may feel unsafe for themselves or for their parents because of the tensions turning violent. Again, children may be burdened with taking sides and this can be destructive for the child and the family especially if they do pick one side against the other. Furthermore, children may end up feeling guilty as they may blame themselves for the tensions. Lastly, tensions between couples is generally a poor model for children and quality of parenting decreases as well as parent-child relationships may suffer.

The literatures thus point to the fact that although the general perception was that divorce iswhat brings about negative child behavior in relation to a child and his/her parents, the actual stressor is parental conflict and tensions especially those witnessed by the children. The solution to this problem may be the whole family or just the child or just both parents seeking professional help and finding ways to solve their conflicts outside the home. Also especially in homes where the children are most likely to be exposed to their parents' fights and quarrels, the parents should find a way to shield their children from such moments and rather consider the timing when bringing up controversial and confrontational issues.

The Author Albert Opare is a political science graduate from the University of Ghana and a social commentator as well as a social & political activist. You can contact the author by mail on [email protected] or txt on 0575125101. Comments and Criticisms are welcome

Eugster,Kathy (2007). Chronic Parental Conflict: How it can be Harmful for Children. Retrieved, 15th October, 2015. From http://www.kathyeugster.com/articles/article002.htm